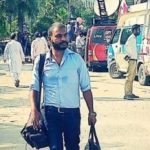 ISLAMABAD: Reporters and media personnel staged a demonstration on Thursday in front of the Ministry of Information for protest against delayed salaries, especially in light of the death of a colleague, who had not been paid for 10 months.

“This is our final warning to the government and media channel owners as we have suffered long enough and will not tolerate this repression any more,” the protesting journalists said, adding that they would file a case against the TV channel for not giving their colleague his due salary.

“Why hasn’t the government paid its dues? Why don’t journalists receive their salaries on time?

“Who is responsible for the financial death of media workers and their families?” they asked during the protest.

“To stifle the voice of truth, the government is putting restrictions on the media,” ‎Pakistan People’s Party (PPP) leader Farhatullah Babar said.

“Political parties are standing with journalists in their time of distress,” Pakistan Muslim League-Nawaz (PML-N) leader Zahid Khan said during the protest.

The protesting journalists said they would continue their struggle until the government and media owners showed responsibility.