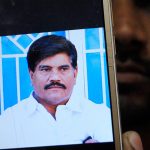 KARACHI: Two major arrests have been made in connection with the murder of journalist Aziz Memon, while police are searching one more key suspect who is still at large, revealed a source close to the investigation of the case.

The body of Aziz Memon (associated with Sindh TV Chanel KTN and daily Kawish) was found from a river on February 16, this year with a mic cable wrapped around his neck. The police had constituted a JIT, headed by Karachi Police chief Additional Inspector General Ghulam Nabi Memon. The JIT then formed a special investigation team to thoroughly probe the matter. It comprised SSP Dr. Farooq of Nausheroferoze, SSP Tanvir Tunio of Shaheed Benzirabad, DSPs Aijaz Memon, Hafeez Abbasi, Inspectors Yar Muhammad Rind and Akbar Channa.

According to sources following the arrest, the suspects would be put under intensive DNA tests and its conclusive report is now being awaited to finalize the case. The sources further added that both the prime suspects have made startling disclosures. However, their arrest would only be publicised once their DNA links them to the murder conclusively. The sources concluded that many DNA tests were conducted and soon the police would announce the major breakthrough.

On the other hand, the brother of murdered journalist and complainant in the case, Hazeez Rehman Memon, has levelled serious allegations against the district police for their alleged incompetence and negligence in his letter written to head of the JIT AIG Ghulam Nabi Memon. He had complained that the suspected persons were released on payment of bribe after cursory interrogation and especially cited the name of a senior police officer and an inspector of the district police. This reporter tried to contact SSP Nausheroferoze Dr. Farooq and other investigating officers but till the filing of this story, they did not respond.