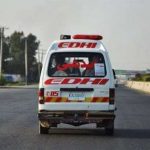 He was rushed to a hospital by his relatives, where he got stitches on his head. He was now stable.

According to Ijaz, he was intercepted by two motorcyclists close to his home on main Peshawar-Charsadda Road near Northern Bypass at the time of Sehri. They asked him about his profession.

When he told them that he was a sports journalist working at APP Peshawar Bureau, one of them hit him on head with some hard thing leaving him unconscious. They attackers then escaped while he was rushed to the hospital by his relatives.

He told APP that he had no enmity with anyone and reported the incident to Khazana Police Station.

Meanwhile, the journalists community of Khyber Pakthunkhwa have expressed deep concerns over the attack on a senior journalist and demanded the police authorities to ensure early arrest of attackers.