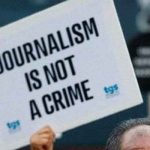 Journalism in Pakistan is a dangerous profession. According to the CPJ (Committee to Protect Journalists) a total of 61 journalists have been killed here in the line of duty since 1992, 34 of which were murders. A less severe form of this silencing of dissenting voices is practiced through persistent intimidation and scare tactics, one example of which was witnessed yesterday at the Karachi Press Club (KPC) when Rangers ‘raided’ the premises under the pretense of a ‘security rehearsal’. Back in late 2018, a similar incident took place when around a dozen plainclothes with guns barged into KPC, examined its rooms, shot videos and took pictures. KPC, the country’s first press club, was established in 1958 and has been through some of the worst periods of press oppression under various dictatorships, but never before has there been such a blatant violation of its rules that do not allow the unannounced entry of security agency personnel into its building. The PFUJ has correctly described the incident as an attempt to ‘terrify the journalist community’. Only a week ago, the Chief Justice of the Islamabad High Court (IHC) described the abduction of journalist Matiullah Jan as an attempt to “scare others”.

Efforts made to control the narrative or contain reporting that is critical of certain institutions or the government, will never fully succeed, especially in the long-run. Conventional media, given the financial constraints it already faces, is more likely to make certain compromises when it comes to its editorial policy, for the sake of self-preservation. Social media however does not operate within these same parameters, has more reach and a tendency to make stories, especially the controversial ones, go viral. This makes it harder to control and any attempts to do so result in outlandish talk of banning content creation websites like You Tube or asking international tech powerhouses like Facebook and Google to set up offices here and grant access to their user data, which is simply not possible in this day and age. The flow of information and the news that runs through it will always find a way to reach a curious audience from one source or another.

By: Editorial of Pakistan Today.