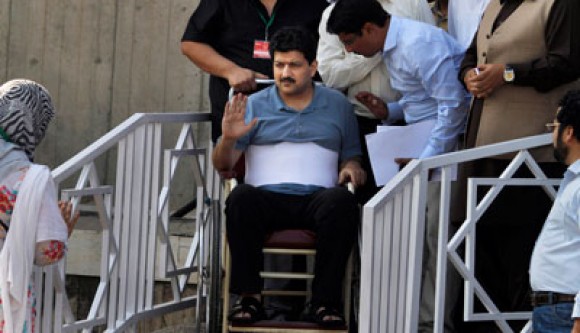 It’s been a year and three months since the last attack on Pakistani journalist Jamshed Baghwan’s house in Peshawar, the capital of Pakistan’s province Khyber-Pakhtunkhwa. The July 2, 2014 incident was the third on his house in four months.

Baghwan, the bureau chief for Express News in Peshawar, recalls how difficult that time was. His kids couldn’t sleep at night afterwards, he says, and they had to stop going to school. There were no fatalities, but it was only pure luck that saved Baghwan.

He was driving home with his wife that night when he saw a group of men put something outside the gate of his house. Minutes later, there was an explosion, which destroyed the front of his home.

That March another bomb had been found outside his house and earlier in April a hand grenade had been hurled at his residence. To date, there are no certain answers about who was behind the attacks.

Police made a few arrests, but no one was formally charged and there were no convictions.

Nor is Baghwan’s experience unusual. As the world marks the International Day to End Impunity for Crimes against Journalists on Nov. 2, most cases of violence against media personnel remain uninvestigated. According to UNESCO’s global statistics, in the past decade 700 journalists have been killed, with no convictions in nine out of ten cases.

“There have been very, very few investigations, and even fewer convictions in the murder of Pakistani journalists,” said Bob Dietz, Asia program coordinator for the Committee to Protect Journalists (CPJ).

Lawyer Saroop Ijaz, who works for Human Rights Watch in Pakistan, shares that opinion. He says the Pakistani government has an “abysmal” record of thoroughly investigating attacks on journalists and holding the perpetrators accountable.

“The formation of Commissions [to investigate attacks on journalists] is turning into a farce,” he told Al Jazeera America.

He mentioned some high-profile cases of targeted journalists, including Wali Khan Babar, a 28-year-old reporter, shot dead in January 2011 in Pakistan’s largest city, Karachi; Salem Shahzad, who was found dead in Islamabad in June 2011 after reporting on the infiltration of terrorist groups in the military and Hamid Mir, among Pakistan’s most famous journalists, who survived an attack on his life in Karachi in April 2014.

“The Saleem Shahzad commission’s report failed to ensure accountability or even name the perpetrators,” said Ijaz.

“The Hamid Mir commission report remains pending and the proceedings shrouded in mystery. The witnesses, investigating officers and prosecutor have been assassinated in Wali Khan Babar’s cases. The impunity surrounding the violence against journalists continues unabated,” he said.

On CPJ’s Global Impunity Index, Pakistan ranks as the ninth worst country in the world in which journalists are murdered and no one is brought to justice. In terms of violence, the year 2015, however, has been better than previous years. In 2014, according to the International Federation of Journalists, Pakistan was listed as the most dangerous place for media with 14 journalists killed.

The high-risk areas in 2015 remain conflict zones such Yemen, South Sudan and Syria.

While the number of journalists being killed in Pakistan has dropped – so far this year, Geo News’s Aftab Alam is the only one killed – the scale of the violence is still disturbing. The attack that killed Alam was among three separate attacks on Pakistani media personnel in a span of 24 hours. (Though some officials have said it is not clear if Alam’s killing was related to his profession.)

“The threat level from all sides remains incredibly high. It is too soon to say the killing of journalists has abated in Pakistan,” said Dietz.

The accusations leveled by Geo TV against Pakistan’s Inter-Service Intelligence (ISI) led to a temporary ban on the channel. However, the channel disappeared from television screens in most parts of the country even before the ban was officially placed, and remained blocked for most of 2014.

“The Pakistani State has not displayed serious resolve to protect journalists, Ijaz said, adding, “By curtailing freedom of expression and criminalizing free speech the Pakistan government is only emboldening violent actors to attack journalists. The accusations of blasphemy and treason leveled on journalists by the State only makes an already beleaguered journalist community even more vulnerable.”

Targeted by all sides

Kati Marton, a board member of CPJ, was in direct contact with Pakistan’s Prime Minister Nawaz Sharif last year with respect to the violence surrounding media personnel.

She said CPJ had kept up pressure on the government since their first meeting with Sharif in March 2014.

“After our meeting we kept up fairly intense pressure on the Nawaz Sharif government, with a string of letters, alerts and blogs, and we returned to Pakistan twice after the meeting with Nawaz. But we have yet to see a serious increase in prosecutions, or even investigations, into the killings of journalists,” she told Al Jazeera America.

Mohsin Ranjha, parliamentary secretary for Ministry of Information, points out that security problems faced by journalists in Pakistan are the same as they are for anyone else.

“Journalists are under security threat, just like politicians, security forces or children in schools are,” said Ranjha, adding “We have never created obstacles for the media in any way, the media in Pakistan is independent. There are several talks shows that air completely false allegations against us, but we have never even tried to stop those.”

In an Oct. 29 report, the Pakistan Press Foundation highlighted the threats media personnel continue to face.

“Pakistani journalists are not only targeted by militants but also by political, religious, ethnic and other pressure groups as well as the law enforcement agencies. …For every journalist who has been deliberately targeted and murdered, there are many others who have been injured, threatened and coerced into silence,” it said.

Journalists in various parts of the country, such as Balochistan, however, cannot even speak about the threats they are faced with.

That province has had the highest number of killings in Pakistan. According to the Balochistan Union of Journalists 41 journalists have been targeted in Balochistan in different incidents since 2008. Because of the high security threat, Balochistan remains an information black hole with virtually no news reaching mainstream media from most parts of the province.

A reporter from Balochistan who requested that he is not identified, remembers friends who have died on duty. But he says he cannot talk about them.

“The situation is too sensitive,” he said, “and Balochistan [remains] voiceless.”