Home » Impunity » Hamid, what’s his crime except speaking for the deprived, persecuted masses 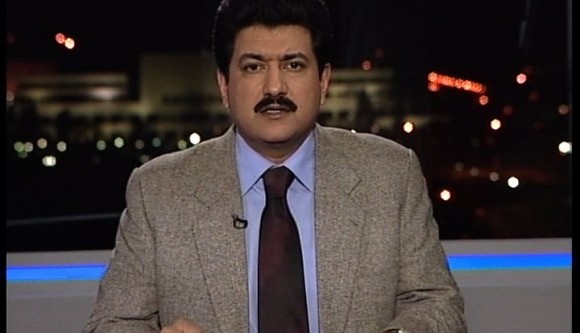 ISLAMABAD: What’s the crime this lovely anchorperson, Hamid Mir, committed that hit the heartless attackers so hard that they pumped six bullets into his body, creating a worldwide furore.

He has been relentlessly speaking against the missing persons especially Balochs. He has the credit of hosting more programmes on this issue than all the talk shows of other private TV channels, put together. This was obviously hurting those who make people disappear and hate any mention of their crimes publicly by anyone.

Like my colleagues in the investigation cell, I never found Hamid Mir speaking against the Pakistan army or the Inter-Services Intelligence (ISI) as premier state institutions, but he always vented out his great dislike for meddling of some of their elements in political matters, which is none of their business, and hiring of stooges by them.

Apart from what Hamid has been saying in his Capital Talk and writing in The News and Jang for years, we often heard his views in a blunt manner on a host of issues when he was engaged in lively discussions with us in our cell that he frequently visited.

In the now somewhat subsided row caused by the statements of two federal ministers against Pervez Musharraf and a remark of Chief of Army Staff General Raheel Sharif, Hamid stood with the democratic forces. He made no bones about his stand. A journalist worth the name is unexpected to act otherwise. He conducted a full-fledged interview with Defence Minister Khawaja Asif, who was being attacked by other outlets by quoting his 2006 speech in the National Assembly. This was done just to malign him. This was also Hamid’s crime.

While winding up one of his recent programmes, he repeatedly said “stop saying bloody civilians”. This was a thinly veiled reference to what some khakis are known for saying about the muftis.

The powers that be wanted Hamid to speak against the government in this tiff that he was not willing to do. He was asked to temper his campaign on the missing persons but he was not prepared to bow to pressure.

While it is no secret to ordinary folks that the security establishment wants to get Musharraf out of the present complicated situation, Hamid always talked against allowing him to fly out of Pakistan without facing the pending court cases. “People of Balochistan will be further alienated if the former dictator went unpunished in the Akbar Bugti murder case,” he would always say.

Not only this, he kept insisting that Musharraf would not be permitted to fly out of Pakistan even if he was convicted; and the government would place his name on the Exit Control List in another case, if it was removed by a superior court.

On April 17, he authored a lengthy piece for The News/Jang on the Nawaz-Zardari meeting in which he also wrote: “They think that some important non-civilian functionaries are near retirement this year and these functionaries are playing a major role in putting pressure on the government in the name of Musharraf trial. Their actual goal is to get some extension.”

At least four days before he let out this information, we talked about these “non-civilians” while exchanging notes. It also cropped up in the discussion that a spymaster has complained to the prime minister about monitoring of his phones by another spy agency to which Nawaz Sharif quickly asked him to produce proof.

When it comes to Kashmir, Hamid would not allow anybody to talk about any concession to India whether it was Musharraf or anybody else in power because of his obsession with this region. He has been earning ire of the successive rulers when he has been swimming against the current.

Hamid, as I know him for having discussions with him for hours for years, is a kind-hearted, brave man, who can’t be bullied by the high and mighty. He is always in search of information and is not tired of doing even tiring leg work for his professional requirement.

He always stands with underdogs and those who are tormented by the state machinery. We would find him in every protest by the journalist community.The list of Hamid’s “crimes” is unending. He will continue to commit them like other journalists of his ilk. He has to otherwise he can no more be called a journalist of conscience.

A stupid argument has been given by some imprudent elements that what happened to him in Karachi was just a warning shot. No. The attack was solely and squarely aimed at assassinating him. He survived because of God’s will. A vibrant voice that is the beauty of the Capital Talk can’t be silenced. Many may have difference of opinion with Hamid on many counts, but use of force to make him fall in line is cruel, spiteful and uncivilised in a civilised society.

Hamid’s brother, Amir, has levelled a serious allegation by naming the ISI chief. It is for this premier agency, which has all the high-tech and sophistication, to investigate on its own, without waiting for any order from the government or the findings of any commission or inquiry, and pinpoint the attackers to clear its chief and other elements. If the agency wills to do this, it can. It should without any hesitation.