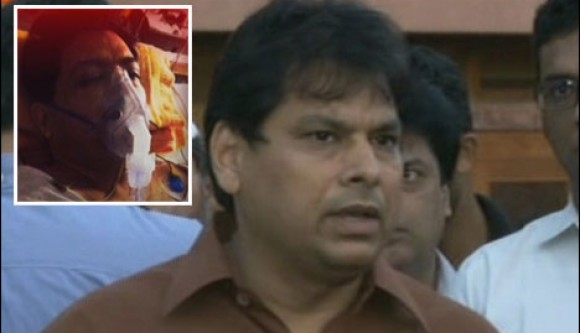 ISLAMABAD: The veiled threat received by Geo News anchor Hamid Mir from an intelligence agency’s officials has striking similarities with the e-mail warning received by the slainjournalist Saleem Shahzad prior to his kidnapping and ultimate death.

In his first formal statement from the hospital bed on Thursday, Hamid Mir said a few days ago, officials of an intelligence agency came to his house and told him that Mir’s name was on a hit list along with some other journalists.

“When I asked as to who had prepared the hit list, the men gave no response,” said the star anchor whose statement was read out before the media by his brother Amir Mir.

Hamid Mir said he had told the officials that in the present circumstances, he faced the greatest threat from the Inter-Services Intelligence (ISI) and they should convey it to their bosses.

It appears that a similar kind of veiled threat was received by the late Shahzad who was the Pakistan Bureau chief of Asia Times Online, Hong Kong, and Italian news agency Adnkronos (AKI).

Shahzad was kidnapped from Islamabad on May 29, 2011 and his body was found floating in a canal near Mandi Bahauddin on May 30 with visible torture marks.

Although, the ISI categorically denied the allegations of its involvement in the murder of Shahzad, the Human Rights Watch (HRW) and the US government officials pointed fingers at the agency. According to the Judicial Commission on Saleem Shahzad case, the slain journalist received an e-mail from the then ISI’s DG Media Rear Admiral Adnan Nazir months before his murder.

“I must give you a favor. We have recently arrested a terrorist and have recovered lot of data, diaries and other material during the interrogation. The terrorist had a list with him. If I find your name in the list, I will certainly let you know,” read the e-mail which was conceived by Shahzad as a veiled death threat.

The commission also found that while forwarding this e-mail to his magazine editor and HRW as a reference in case of any untoward incident, Saleem also cc’d this e-mail to Adnan. “The commission thus has reason to believe that these words were indeed uttered by Rear Admiral Adnan and were accordingly perceived by Saleem to be a threat.”

However, in its report, the commission had also clarified that the e-mail could not be considered as “sufficient circumstantial evidence” against the ISI.

“The commission has no reason to discard the perception of Saleem in construing such words as a threat and showing his reaction…However, there is evidence available on record which shows that in the subsequent seven months, Saleem and Admiral Adnan Nazir kept interacting with each other, and the tone of the interaction is absolutely normal, decent, courteous, friendly and cordial, as if no threat was ever given to or perceived by Saleem. This dilutes the effect of the crucial e-mail. This threat, after the lapse of seven months, cannot singularly be taken as a sufficient circumstantial evidence to conclusively hold that ISI is responsible for this incident on that account,” said the report.

Nevertheless, the commission has not ruled out the strong perception in the journalist community that the ISI harasses and intimidates journalists.

During the course of inquiry, the commission recorded the statements of several senior journalists including Hamid Mir, Absar Alam, Imtiaz Alam and all of them complained about Rear Admiral Adnan Nazir.

Although, threats and acts of intimidation are denied by the ISI, “yet from the statements of the above named, the commission cannot hold that their understanding and perception about the threats etc. extended to them are misconceived, simply for the reason that it had been refuted by the ISI official.” When so many senior and respected journalists have come forward to record their perception, noted the commission, that they found certain words, gestures and acts of ISI officials as intimidating and threatening, then it is hard to dismiss it lightly, “merely on account of a bald denial by ISI.”

“Therefore, from the overwhelming material available on record, the commission is convinced that there are sufficient reasons to believe that the agencies, including ISI, have been using coercive and intimidating tactics in dealing with those journalists who antagonise the agency’s interest.”

Finally, the commission noted that the strong perception in journalist community that the ISI has had a motive to kill Saleem Shahzad may hold some weight, but there is no tangible evidence to establish that fact.

It may be noted that various allegations of excesses by the agencies, including ISI, have been leveled by journalists, politicians and others.