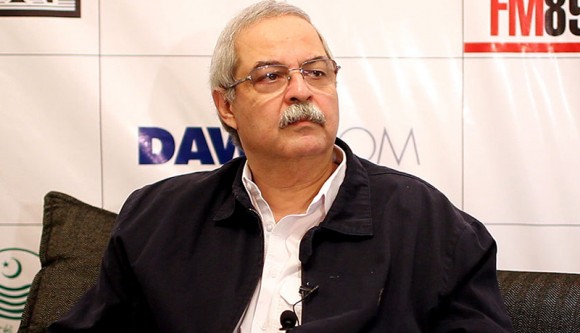 Hameed Haroon, the President of the All Pakistan Newspapers Society (APNS), has expressed concern that the freedom of press envisioned in Article 19 of the Constitution of Pakistan is now facing the gravest threat it has encountered in the past decade, and if press freedoms are allowed to deteriorate further, an irreversible damage will be inflicted on Pakistan’s democracy and the constitutionally stipulated freedoms associated with it. He has emphasised that apart from the dangers of targeting the lives of journalists by extremist elements in the country, a dangerous drift towards anarchy has reared its ugly head in the past week where unbridled behaviour on the part of certain sections of the security establishment and the media, coupled with confused signals emanating from government, have resulted in damaging the freedom of expression and the freedom of press enshrined in the Constitution.

“The signs on the horizon are clear. The fundamental problem appears to be that every one of the principal players involved in this crisis is responsible for a saddening deterioration of public affairs. The apparent undue haste with which the Independent Media Corporation and the Independent Newspaper Corporation, the twin media firms controlling the Geo-Jang group, pointed an accusatory finger at the Inter Services Intelligence (ISI) as being complicit in what can only be described as a murderous attack upon television anchor and columnist Hamid Mir, is only one part of the problem. The promptness with which the ISI through its Deputy Director General responded with a complaint through the Defence Ministry to Pemra to seek revocation of the broadcasting licences and the declarations of the GEO-Jang group, has clearly demonstrated that the institution of the armed forces has acted in haste and has not critically examined the validity of their positions nor of subsequent actions that have stemmed from a misconceived interpretation of press laws.

“At first the government appeared to be dealing wisely with the new threat to press freedoms posed by the murderous attacks on Raza Rumi in Lahore and Hamid Mir in Karachi. The Prime Minister of Pakistan, Mian Nawaz Sharif, speedily acted to form a judicial commission to investigate the attempt on Mir’s life at the highest level. One would have thought with an appropriate high-level commission of enquiry, composed of the superior judiciary, any investigation of the incident of the attempt on Hamid Mir’s life appeared to be in capable hands. However, within a day of the Prime Minister’s announcement, the ISI through the Defence Ministry called for the revocation of the licences and declarations of the GEO-Jang group, with Pemra officials making suitably supportive statements. Thus despite a wise move by the Prime Minister to constitute a commission immediately, the guilt of the offending party had been prejudged, well in advance of the verdict.

“Clearly the need of the hour is to immediately force a cooling down of tempers in all sections of the state and security apparatus as well as, critically, within the media itself. If we are to speak of ensuring the ‘preservation of the sovereignty, security and integrity of the Islamic Republic of Pakistan’ then the imperative is for all contending parties to exercise restraint.

“Additionally, the damage in this potentially explosive powder-keg needs to be contained. The judicial Commission of Enquiry should begin work immediately and avail of the services of Hamid Mir, among others, to reach a satisfactory conclusion as to which persons were responsible for engineering this attempt. Only when the findings are made public can it be determined whether the management and journalists of the newspaper (who have both been alleged as complicit in a slander campaign according to the ISI complaint to the Defence Ministry), were justified in levelling their early allegations. Nor would it be just to proceed with any retaliatory actions against this media group, awaiting the results of the high-level judicial enquiry that has been instituted. Such a travesty of justice is not becoming for any credible democracy.

“I appeal on behalf of the APNS, to Gen Raheel Sharif, the Chief of Army Staff, to rein in the knee-jerk retaliatory measures that have been initiated by various segments of the armed forces. This will lessen any public misperceptions with respect to what the security establishment sees as its principled stand in the matter. It is grossly unfair that Lt Gen Zaheerul Islam or any other member of the security establishment be presumed guilty unless the substance of such guilt can be irrefutably proved in a commission of enquiry. If he is found innocent, the media group found guilty of publishing and broadcasting such allegations against him must render an unqualified apology as per the valid international norms that govern such situations.

“In the meantime I also appeal to all sections of the media to exercise credible restraint and desist from publishing or broadcasting any statement which might be considered prima facie as defamatory or slanderous either against the ISI chief or against the media group. Concurrently it is imperative for the Prime Minister and the Federal Minister for Information to immediately commence a formal dialogue with all the major national bodies — the APNS, the CPNE, the PBA and the PFUJ — to attempt to provide a meaningful framework in which journalists can tell the truth and be protected from life-threats while doing so. This alone will ensure the ordered functioning of a nascent democracy and encourage the government to clamp down with unbridled severity on the spiralling incidents of violence against the media.”