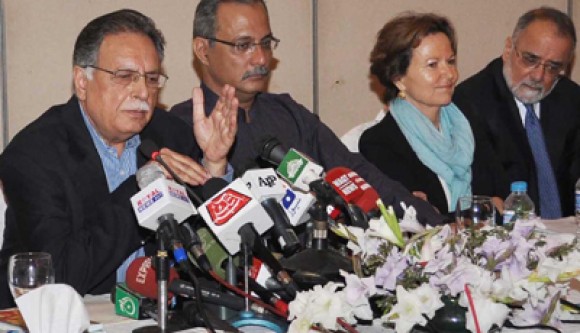 ISLAMABAD: Minister for Information, Broadcasting and National Heritage Pervaiz Rashid said on Wednesday the government was committed to the freedom of expression and was taking steps to ensure that the media persons could perform duty in a safe and secure environment.

Addressing a meeting of Steering Committee of Pakistan Coalition on Media Safety (PCOMS) here as chief guest, the Minister said Prime Minister Muhammad Nawaz Sharif had unflinching commitment for freedom of press and had assured the Committee to Protect Journalists that provision of safe working environment to journalists was top priority of the government.

He said time had proved that free media was a prerequisite for democracy and for individual liberties.

Had there been a free media in 1999, the Pakistan Muslim League-Nawaz (PML-N) leadership might not have faced imprisonment and exile, he remarked.

Pervaiz Rashid said like the media persons, the entire society was feeling insecurity. Even schoolgoing children and their schools were not safe, worship places and worshippers were not safe, traders, industrialists and men on the street were not safe.

“We will have to see the problem in its totality and take steps for improvement of law and order situation as a whole,” said the Minister.

He said the menace of terrorism had been affecting the society for the last 10 to 12 years, but none of the previous governments took any steps to rectify the situation.

“The people of Pakistan have given the PML-N the mandate to resolve the problems, including power crisis and economic situation. The government will also take measures to rid the country of the menace of terrorism,” he added.

He said all the political parties and civil society were on one page as far as the issue of eradicating terrorism was concerned. It was a fact that the writ of the state had weakened during last decade or so and institutions needed for statecraft had weakened, if became not ineffective.

Pervaiz said reconstruction of state organs was need of the hour. As per social contract, the state was responsible to provide security to the masses, he added

He said it was heartening to note that the entire society was fully cooperating with the government in its efforts to restore the writ of the state.

He said the Prime Minister took personal interest in the Wali Babar murder case for shifting its hearing from Karachi to Sukker and this step proved to be fruitful.

The Prime Minister had assured that the journalists killing cases would be transferred to anti-terrorist courts and the government would appoint prosecutors for their quick disposal, he added.