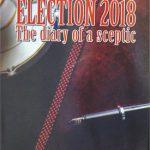 KARACHI: “The book tells you about the situation in the newsroom, the pressures, the censorship and the compromises made during reporting of events like the general election,” said Kamal Siddiqi, a former journalist and director of Centre for Excellence in Journalism at IBA, while speaking at the launch of senior journalist Nizamuddin Siddiqui’s book, Election 2018 — The Diary of a Sceptic, at the Karachi Press Club (KPC) on Thursday, exactly one year after the said elections.

“Our young generation needs to read about what has been happening in Pakistan’s history through the eyes of a journalist and people who write such books and bring things on record are like saving graces. Otherwise when designing courses for media students, we find that not much has been written about Pakistan’s journalism history and we are left with Zamir Niazi Sahib’s books to quote from,” he said.

“It is an interesting book, not abstract but a practical treatise, which should be made recommended reading for media students,” he added.

Senior journalist Zubeida Mustafa said she wanted to congratulate Siddiqui on his style of writing. “I was not in the country during last year’s general election and I used to keep abreast with happenings through Dawn.com and the details I missed I have come to learn about now through this book,” she said. “It looks at the elections through the lens of a journalist.”

She said the author’s observations were an interesting read. “He shares his view about political parties. He also talks about the army’s role, and quite openly and freely at that,” she said.

“He has also written about religious parties and how the Election Commission of Pakistan accepted these parties. He has not even ignored women and the role of female voters in the last elections and it is great that all these aspects have been recorded in book form,” she said.

Dr Riaz Sheikh, the dean of social sciences faculty at Shaheed Zulfikar Ali Bhutto Institute of Science and Technology (Szabist), recalled the country’s previous elections and martial laws while appreciating the book. “This is basically a diary. And like other diaries that have recorded important moments of history such as The Diary of a Young Girl by Anne Frank, Akhtar Baloch’s diary, etc, it serves as a primary source of research.”

Senior journalist Mazhar Abbas said a story written by a journalist was like an open first information report. “You can make additions to it,” he said. “Nizamuddin Siddiqui’s book is a great source of reference as one often tends to forget things. Its conclusion is inconclusive as several questions about the 2018 elections remain unanswered,” he said. “The second edition must take the argument forward.”

The event was presided over by Dawn newspaper’s Readers’ Editor Muhammad Ali Siddiqui, who appreciated the effective use of words by the author for maximum impact. “You have to be an avid reader, especially of books, to know how to do that.”

He said young people so engrossed in their smartphones needed to cut down on screen time and read more books to get a fair idea about what happened before the elections, what happened on election day and what is going on now around them.

Speaking about his book the author Nizamuddin Siddiqui said that he had a feeling about all not being well with the elections last year so he started observing things rather closely. “We newsroom journalists have odd timings so when penning my thoughts I was also not sure where to find the time to do the research. But then I thought that the diary format suited me more,” he said.

“After sharing my first draft with a colleague, Maleeha Siddiqui, I got feedback that it sounded like reportage. Then when I showed it to Kamal Siddiqi, he encouraged me to complete it. Those who feel I have not shared my opinion or views I will tell you that my viewpoint is very much in there however subtle,” he added.

Earlier, political commentator and teacher of journalism Dr Tauseef Ahmed, who moderated the event, said instead of digging out old newspapers while doing research, students of political science and journalism can read the book. “If you missed any news stories about the 2018 elections, you can always catch up on the events that took place during those days.”