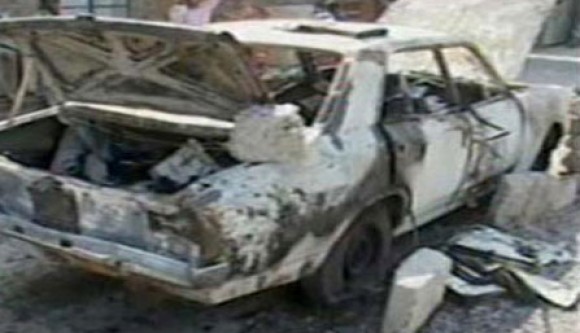 RAWALPINDI: The anti-Jang Group people attacking the group through different means this time torched a delivery vehicle of the Daily Jang loaded with Friday’s religious edition, after kidnapping and torturing the driver of the vehicle, in the wee hours of Friday.

The driver was shifted to the Holy Family Hospital after the “well-known captors” threw the blindfolded man in critical condition somewhere at Rawat.The Banni Police, however, have registered the case against unidentified criminals under sections 436, 427, 341, 342, 147 and 149 PPC but haven’t yet traced the “criminals” embroiled in the anti-Jang Group activities.

The driver of the delivery vehicle, Mohammad Razzaq, an employee of the Universal Distribution Network (UDN), said he was attached with the delivery network of the Jang Group as a driver for the last two years, adding that he left the Al-Rehman Building on his vehicle (registration number AJKA-3103) loaded with thousands of copies of the Friday’s edition of Jang for the Akhbar Market, Aabpara, at 2:10am.

He said gunmen on two vehicles intercepted him and straightaway dragged him out of his vehicle and pushed him into one of their cars. The driver said that the gunmen thrashed him inhumanly, blindfolded him and tied his hands on his back with a nylon rope. He said that they kept torturing him during about one-hour-long drive and later threw him out of their vehicle.

Razzaq said that as the light of the dawn appeared, a passer-by untied him and on query, he told him he was at the Chamber Road near Rawat. He, however, walked to Rawat and sought help from a van driver and informed his brother from the van driver’s mobile phone who reached there and started searching the delivery vehicle, which was left at the place from where he was kidnapped. His brother shifted him to the Holy Family Hospital as his condition was worsening, the driver said.

The management of the Jang Group reprinted the burned copies and sent them for distribution.Earlier, on May 30, unidentified assailants equipped with lethal weapons, set the van carrying The News and Jang Friday edition to transport to Islamabad, after creating fear among the people at Committee Chowk. People who witnessed the last Friday attack confirmed that the assailants were carrying lethal weapons and they acted as professional fighters. “Their delivery was not like normal citizens or agitators but they seemed as trained people,” the witnesses said.