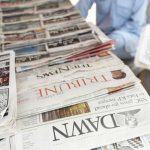 LAHORE: The Council of Pakistan Newspaper Editors (CPNE) has opposed the government’s proposed advertising policy, terming the state of media freedom in the country alarming.

The CPNE said in a statement after a meeting of its standing committee on Sunday that imposing restrictions on freedom of expression was a violation of basic human rights.

It expressed reservations over certain proposals for the advertising policy, resolving to come up with its own suggestions for a “judicious distribution” of advertisements in order to protect regional and small newspapers.

The CPNE called upon the government to do away with restrictions and censorship, whether direct or indirect. It lamented that government advertising for newspapers had stopped altogether, or its quantum had fallen, in Sindh and Balochistan.

Dr Jabbar Khattak, the CPNE’s secretary general, said only a handful of newspapers were getting government advertisements.

He stressed the need for an equitable policy for distribution of advertisements.

Participants at the CPNE meeting said the media was grappling with a host of problems, e.g. government interference, economic insecurity of workers and security issues.

The CPNE pledged to resist moves to curb dissent and urged the authorities concerned to discontinue draconian measures against the media.

Aijazul Haq, a former secretary, said after the filing of a constitutional petition by the CPNE in the Sindh High Court (SHC), the Sindh government paid some dues till the 2018 general election, but it had made no payment for advertisements released through advertising agencies.

The meeting resolved to file constitutional petitions in high courts for payment of dues by the federal and provincial governments.

Expressing solidarity with Ikram Sehgal, the council’s vice president, the CPNE condemned the ongoing campaign against him on social media regarding a ceremony before the World Economic Forum at Davos last month.