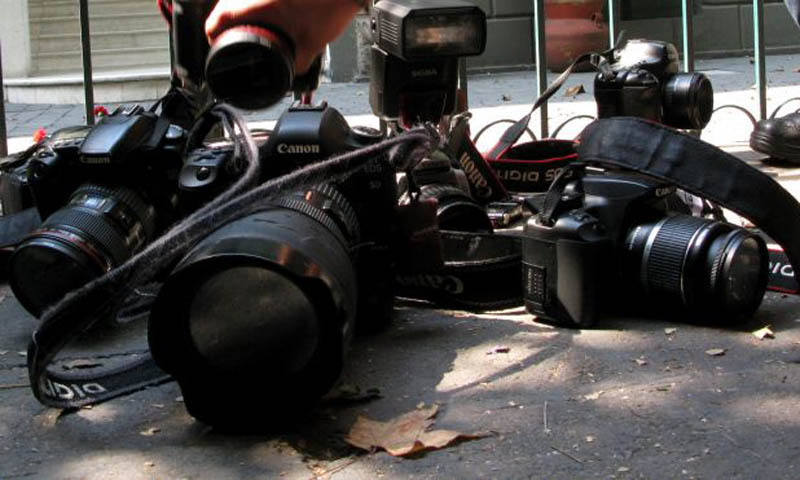 ISLAMABAD: As the Sunday morning sun rose on Constitution Avenue, journalists and camerapersons from various private TV channels were among the restless crowds of protesters, recording and relaying footage and information to their headquarters in real time.

But as protesters surged forward for the umpteenth time, pelting police with stones and whatever they could lay their hands on, fresh orders made their way to the uniformed contingents of policemen deployed at the venue.

“I was standing on the sidelines, filming the protesters being beaten up when I heard the cry ‘media walan nu maro’ (beat the media people),” Samaa cameraman Khurram Fayyaz told Dawn.

Khurram was one of the first to be attacked. He recounted how, after an initial scuffle that saw his camera broken, he managed to escape in the direction of DSNG vans parked near D-Chowk.

At least 28 mediapersons bear the brunt of police high-handedness “I took refuge in a Dunya TV van, but the driver refused to help and the pursuing policemen caught up with me. They pulled me out of the van and let me have it,” he said as he showed us his back, which was black and blue with baton marks.

Khurram’s head was also bashed in and he was bleeding profusely as he was brought to Pims. He suffered a concussion and needed eight stitches to close the wound.

Samaa TV’s Ajab Khan was also attacked in the melee early on Saturday morning. He was shifted to the Polyclinic. When Dawn tried to reach him, a close friend answered his cellphone and said Ajab had been shifted to Shifa Hospital for a CT scan of his skull, which was badly injured.

Over half a dozen DawnNews cameramen and reporters were also targeted by the police in their high-handed rampage against mediapersons. Hasnain Raza, Assignment Editor at DawnNews’ Islamabad desk, said cameraman Kashif Abbasi’s arm was broken; Noshad Abbasi was baton charged and also received injuries from teargas shells that hit him directly, while reporters Yasir Malik and Samar Abbas were also affected by tear gas.

“Ishfaque Hussain, who had been called in from the Peshawar bureau, was hit with plastic pellets and rubber bullets, while cameramen Imran Chaudhry and Mansoor Ahmed were also assaulted while covering police brutality against PTI and PAT supporters,” he said.

Express News’ Amir Alam, who was carrying his injured cameraman Majid Shah with one arm and flashing his press card with the other, was also attacked.

“The police just pelted us with stones,” he said. He was then beaten severely with batons and received injuries to the head, knee and hands. Express News cameraman Usman Afzal and driver Bakht Zameen were also hurt in clashes with police on Sunday.

Aaj TV’s Rana Tariq was lucky to escape following a near-deadly dose of teargas. But his fellow cameramen Haroon Khurshid and Ghulam Ali were not so lucky. They were surrounded by police and severely beaten as well.

Most of these mediapersons were rushed to the Pakistan Institute of Medical Sciences on Sunday morning. Tahir Imran, a journalist who was at Pims when mediapersons were first brought to the hospital, offered some hope.

“One of the cameramen, Noshad, told me that he was rescued by an official of the Islamabad police, who pleaded with the men beating him to stop.”