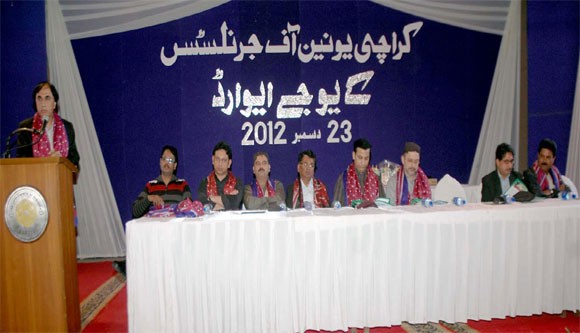 KARACHI: Sindh Information Minister Sharjeel Inam Memon has said that conspiracies are being hatched to create strife among the people of the province.

According to the Pakistan People’s Party (PPP) leader part of the said conspiracy is the appointment of an election commissioner who belongs to Punjab. Memon stated clearly that he was against this appointment.

He was addressing the haleem party of the Karachi Union of Journalists (KUJ) at Arts Council Karachi and the gathering was held to give cash awards to the families of its members who lost their lives or got injured in bomb blasts, while performing their duties as reporters or cameramen.

Memon said that terrorists were a threat to the whole nation. He said all political parties and civil society should jointly fight against the menace. He was of the view that Bashir’s death was a great loss to Pakistan and democracy and the attackers belong to the same group that attacked Benazir Bhutto.

The information minister appreciated the efficiency of the KUJ and said that by providing Rs50 million and land for flats to the organisation, the government has done nothing more than what was its duty.

He said that the journalist community has always worked with the PPP in its struggle for restoration of democracy. He said that in dangerous circumstances, media personnel are at the highest risk and, therefore, life insurance scheme is being introduced for them.

The PPP leader said that all the journalists of Sindh will be issued smart cards for their insurance.