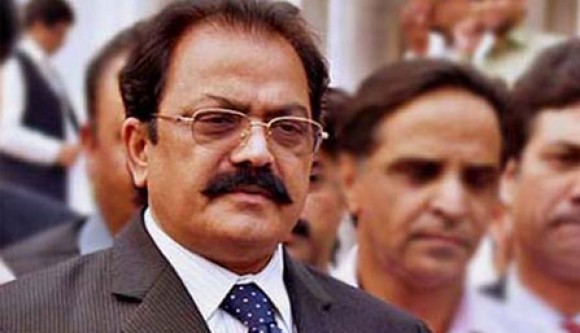 LAHORE: Journalists working for different media organisations on Thursday gathered outside the Punjab Assembly and vehemently condemned the action against Geo and vowed to protect the media freedom at all costs.

Punjab Law Minister Rana Sanaullah Khan and Punjab Assembly Deputy Speaker Sher Mohammed Gorchani expressed solidarity with the journalist community, condemned the action against Geo and warned that any action meant to curb the media freedom would eventually cause huge damage to democracy.

Speaking on the occasion, Rana Sanaullah said the Punjab government would ensure security for cable operators, but they were highly scared of some hidden forces and due to this fear, they were reluctant to continue the transmission of Geo. He said action against one TV channel would mean action against all. If the practice of threats from the cable operators to shut the transmission of any channel starts now, no other channel would be able to save itself from it in future. Sana said the media could only be regulated through laws and a code of conduct.

The law minister said journalists had exhibited remarkable unity in the struggle for free media and their present movement would also bring forth success. He also pledged complete support to the journalist community on the behalf of the PA in their struggle to protect the media freedom.

Condemning action against Geo TV, journalists from various media groups staged demonstrations in support of media freedom and showed unity in their ranks in a bid to safeguard the freedom of press.

“Ek pay Hamla, sub pay Hamla” (assault against one means assault against all) was the most chanted slogan by the journalists in the protest held outside the PA to condemn the suspension of licence of Geo TV and curbing of press freedom.

Speaking on the occasion, Khawar Hashmi said the journalist community was united when it came to the freedom of press. He said he firmly believed that what was being done against Geo at the moment was not against any one organisation but against the entire media freedom as not Geo but the media and the democratic government of Pakistan seemed the real target in the present scenario. He said if these forces succeeded in their designs, it would be a disaster for democracy and the press freedom. Not only this, he said the freedom our media had attained due to its long struggle, if snatched this time, would not be regained. He said all of us need to realise the gravity of the situation and must protect our freedom.

Moreover, Hashmi said action against Geo and Jang would mean the economic murder of around 9,000 workers and thousands of their family members whose bread and butter had been put at stake.

He said the entire community had a very important role to play as it had to foil any conspiracy against the freedom of the press and save thousands of people from their possible economic murder. He also stated all this had been done to divert the attention of people from the heinous targeting of senior journalist Hamir Mir.

About the allegations levelled against Geo regarding the morning show hosted by Shaista Wahidi, Hashmi said Ulema from different schools of thought had clearly stated that if something had been done unintentionally, the doors of forgiveness were open on the wrongdoers. But despite that, some elements were busy in issuing decrees against us just on the basis of a grudge against Geo.

Asim Naseer, in his address, warned that the entire country would have to suffer if the present crisis led to the economic murder of journalists. He said the journalist community had gathered outside the PA but if their targeting continued unabated, they would take to the streets to snatch their rights from the usurpers. He said the incumbent government should play its role in addressing the issue and save hundreds of thousands of people from their economic murder. The journalists also chanted slogans in support of ‘Journalist Unity.’

Meanwhile, EMRA, led by its President Asim Naseer, decided to set up a camp outside the Geo offices in connection with the movement meant to protect the media freedom.