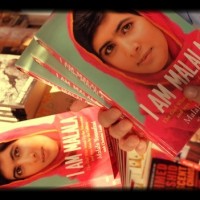 On Jan 28 this year, the Khyber Pakhtunkhwa (KP) government that is being headed by Imran Khan’s Pakistan Tehreek-i-Insaaf (PTI) and its ally, the Jamaat-i-Islami (JI), disallowed a launch of Malala Yusufzai’s book at the Peshawar University.

The ceremony to launch the book was being organised by the the Bacha Khan Education Foundation (BKEF), a welfare outfit associated with the left-liberal Awami National Party (ANP).

Khan’s PTI, which managed to dislodge the ANP during the May 2013 election, has increasingly shifted its policy-related moorings to the ‘rightest’ sides of the conventional ideological divide.

Consequently, with the kind of disconcerting rise witnessed in the country in violent hate crimes against military personnel and civilians by extremist and sectarian outfits, the PTI has come under some severe criticism.

As a consensus seems to be rapidly developing against these crimes, the PTI has been accused of playing the role of an apologist party for the extremists.

The criticism in this respect has not only come from the left and liberal sections of the society that are largely represented by parties such as the Pakistan Peoples Party (PPP), the Awami National Party (ANP), and the Muttahida Qaumi Movement (MQM). The centre-right, Pakistan Muslim League-Nawaz (PMLN) — that has a ruling majority in the National and Punjab assemblies — has also blamed the PTI for trying to arrest the changing national narrative against extremism by sticking to the old (and rapidly thinning) plot that sees extremist violence as a reaction to US drone attacks and War on Terror.

But whereas PTI’s charismatic chief, Imran Khan, seems to be coming around to (albeit grudgingly) accept the fact that indeed the old narrative has lost its convincing power in the wake of the unprecedented rise in extremist violence in the last eight months or so, many of his party personnel can still be seen on TV talk shows angrily using the same arguments that have ended up giving the PTI its unsavoury apologist label.

Though Khan exercises almost dictatorial powers in the party, one is not sure how much of him is there in certain controversial and reactive decisions taken by the PTI regime in the KPK.

When young Malala Yusufzai was shot and injured by the extremists in Swat last year, Khan promptly visited her at the hospital. But he did not mention her at all during PTI’s election campaign in Swat.

Last week, when those bothered by the KP government’s move regarding the book launch Tweeted about it, they were at once (and right on cue), attacked by a barrage of PTI supporters for promoting ‘Western agenda’ and ‘undermining faith.’

However, on the same day, Khan’s Twitter handle asked why would anyone ban the launch of a book written by Malala?

One thus wonders exactly what sort of communication really flows between the chief of the PTI and his more rabid followers, or for that matter between him and his party’s government in KP.

Many political observers have explained a large section of PTI’s members to be made up of young men and women who were born at a time when a reactionary mind-set designed by the country’s former right-wing military dictator, Gen Zia (1977-88), had begun to take root in the country’s media, schools and urban middle-class polity.

These observers suggest that political inexperience and the tendency to understand history and politics through the skewed and myopic perceptions weaved and propagated by the state under Zia, have often left PTI members sounding like apologists and reactionaries ( but believing themselves to be revolutionaries).

Malala’s book, I am Malala, is openly available in book stores in the Sindh and the Punjab provinces, even though initially some private schools decided not to make it a part of their libraries, fearing violence from the extremists.

In the KP however, the book has been treated like a live grenade by the province’s government. Though there are hardly any good book stores left in cities like Peshawar, the KP government is hell-bent on keeping the book out.

Scientist, author and liberal commentator, Dr Parvez Hoodbhoy, is of the view that Malala and her book are seen as a threat by those who want to continue doing politics on the old, right-wing narrative that is now wearing thin.

Hoodbhoy recently saw himself trapped by a TV anchor who (without telling him), surrounded the scientist with two intransigent men (one a civil servant masquerading as a ‘scholar’, and the other an ‘investigative journalist’ who seems to spend more time pretending to be an expert on social morality on TV channels).

Hoodboy was hounded by the two men for praising Malala’s book and afterwards he accused the two men of propagating hatred against a Pakistani school girl who was half their age.

Of course, the two men and hundreds of PTI and JI supporters (on social media), who were so fervent in their criticism against Malala (calling her a Western agent and anti-Islam), and against her book, have no complaints about the volatile hate literature against certain Muslim sects, sub-sects and the country’s minorities, that is still freely available in many parts of the country. In the 1980s, when the Zia dictatorship put a complete ban on two books he thought were against the ever-elusive ‘Ideology of Pakistan,’ his regime was churning out sectarian and extremist hate literature in the name of serving faith.

Zulfikar Ali Bhutto’s If I Am Assassinated (written by the former PM when he was in jail and awaiting death by a sham trial), and Stanley Wolpert’s Jinnah of Pakistan, were completely banned by the Zia regime.

Both the books became openly available after Zia’s demise in August 1988.

It wasn’t the books that triggered the moral, social and political decay that began to creep into the ways of Pakistan from the 1980s onwards. It was the reactive and self-righteous mind-set and consequent policies of those who banned these books.