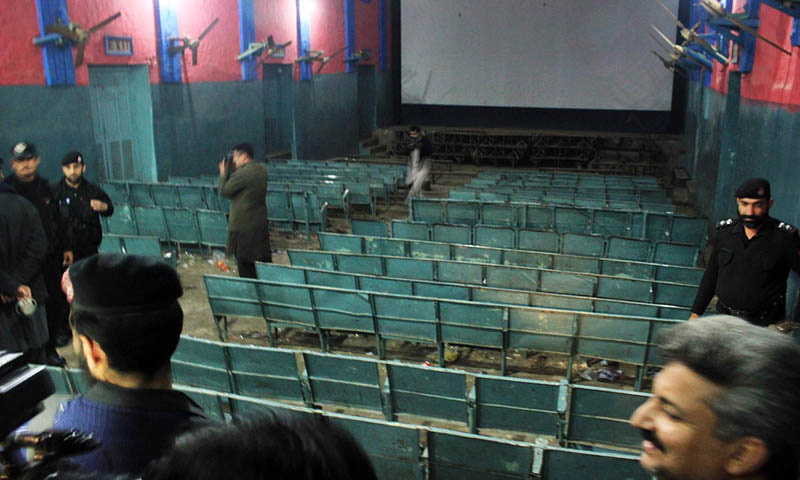 According to police officials, two hand grenades were lobbed inside the hall of Picture House, one of the oldest cinemas in Peshawar situated on the Cinema Road near Qissa Khwani Bazaar, during the screening of a Pashto film.

“Initial investigation suggests that the grenades were hurled by a person from the rear seats in the theatre,” SSP Najeebur Rehman said.

He said police had already warned cinema owners against threats and asked them to improve their security arrangements. He said police were investigating the security lapse and how the man had managed to take the grenades into the hall.

Bomb disposal squad personnel found two pins of the grenades. Rescue workers of Edhi and Al Khidmat Foundation were seen shifting the dead and the injured to the Lady Reading Hospital.

“About 100 people were in the hall at the time of the explosions,” SP Faisal Mukhtar said, adding that the China-made grenades were small in size and easy to conceal even in the turban. Khyber Pakhtunkhwa Health Minister Shaukat Yousafzai told journalists that five people had been killed and 31 others injured. The condition of four of the injured was critical.

Witnesses said the blasts were quite powerful. They said they had seen a large number of people crying for help. The panic-stricken people were seen rushing out of the hall with pools of blood and shoes and sandals lying all around.

It was the day’s third show of Pashto film “Zidi Pakhtun” (stubborn Pakhtun). The show was about to end when the grenades exploded.

Several blasts have taken place in the congested market area in the past.

In September last year, a car bomb blast killed about 43 people. In May 2009, a bomb ripped through a cinema, Tasveer Mahal, leaving nine people dead.

Provincial Information Minister Shah Farman said a third force might be involved in the grenade blasts to sabotage peace talks between the government and the Taliban. “Whenever there are prospects of peace talks either drone attacks take place or such acts of terrorism are engineered by the elements averse to negotiations,” he said.

There was no claim of responsibility for the blast till late night. According to some TV channels, Taliban had stated that they had nothing to do with the grenade attack.