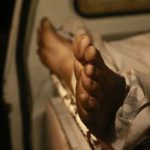 Indictment in the DHA double murder case was deferred once again on Thursday after the jail authorities failed to produce the prime suspect, Atif Zaman, in the court citing his bad health.

A hearing of the case was held in the judicial complex at the Karachi Central Jail. An additional sessions judge of District South sought the suspect’s medical reports from the authorities to evaluate his medical condition.

In the meantime, the court also issued notices to the prosecution and the complainant sides to submit their arguments on January 14 over the bail application moved by the other suspect, Adil Zaman, brother of Atif.

The Sindh home department on December 10, 2019, had informed the previous judge presiding over the case, Ramesh Chandar Rajpur, that the case had been transferred to a court in the central prison for security concerns. The letter to the judge read that unwanted incident could occur during the trial for two murders at the City Courts.

Atif and Adil have been booked for murdering anchorperson Mureed Abbas and Khizar Hayat in Defence Housing Authority on July 9, 2019, over a monetary dispute.

The case has been facing adjournments since it started. Earlier, an anti-terrorism court reverted the case back to a sessions courts observing that it did not fall within the ambit of the Anti-Terrorism Act.

The ATC’s decision, which came after Atif contradicted the police’s claim about his confession before a judicial magistrate, was a blow to the police and the prosecution’s recommendation.

The prime suspect instead said he wanted to contest the charges but police were trying to pressurise him into confessing. He was arrested after he allegedly tried to commit suicide by shooting himself in the torso at his apartment following the alleged murders of Abbas and Hayat.

According to the charge sheet, Atif called Abbas and Hayat, who were his business partners, to different places, a few hundred metres away, in DHA on the pretext of returning some of the amount he owed them.

He first allegedly shot Hayat at a signal and later went to kill Abbas in an office. CCTV footage showed Adil accompanying Atif during the spree. It was transpired later that the weapon used by Atif belonged to Adil who has maintained that he did not know of his brother’s intention to murder.