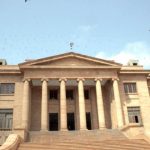 KARACHI:The Sindh High Court (SHC) sought on Thursday replies from the parties mentioned in an appeal filed by journalist Nasrullah Chaudhry, who has been convicted in a case pertaining to possession of prohibited literature.

A two-member bench was hearing the plea filed by Chaudhry, which maintains that the verdict which was given by an anti-terrorism court (ATC) violated the journalist’s fundamental rights.

According to Chaudhry’s lawyer, Muhammad Farooq, the journalist was kept in illegal custody by the counter-terrorism department (CTD) for three days before his arrest was declared in an “illegal and baseless case.” Farooq asserted that even the FIR registered against his client was illegal, adding that the statements given by witnesses were false, with journalists being coerced and threatened.

The lawyer added that Chaudhry’s illegal detention by the CTD had been disregarded by the ATC. Moreover, he maintained, the prosecution had failed to substantiate the case as no solid witnesses were presented to prove that the accused had been in possession of prohibited literature.

The court sought replies from the relevant parties and adjourned the case until January 14.

The SHC issued notices to the director-general of the Karachi Development Authority (KDA), directing him to state his position in a petition against the conversion of the legal status of amenity plots in the city.

Naqvi claimed that as per the orders of the superior courts, the legal status of amenity plots cannot be changed, but the Sindh government had changed the legal status of land in Surjani Town and Mazar-e-Quaid, after which sites meant for public parks were made part of the bus rapid transit (BRT) project.

The court asked Naqvi to prove that the plots were earlier used as parks. It further directed him to present proof regarding the legal status of the plots, while observing that the BRT project was also meant to further public interest.

The petitioner responded that the declaration of this land as commercial areas was illegal and as such, the proof and witnesses should be demanded from the provincial government.

The court asked him why he had not filed the petition when the BRT project was launched, wondering why he was bringing it up two years into work on the project.

The court directed the KDA DG to state his position in the next hearing, to be held on January 24.

In a hearing for another case, the same bench directed the same petitioner challenging the appointment of advisers and special assistants to the Sindh chief minister to include copies of the notifications regarding the appointments as part of his case.

The petitioner maintained that the advisers and special assistants to the CM were using the powers meant for elected representatives while also managing portfolios and drawing emoluments meant for ministers.

Murtaza Wahab, the adviser to the CM on law, environment, climate change and coastal development, was drawing perks meant for ministers, including a bullet-proof car, he claimed, requesting the court to remove the appointments of the advisers and special assistants. Wahab had earlier been removed from his position on court orders but he was later restored, Naqvi added.

The hearing was adjourned until January 22.

Meanwhile, the SHC also issued on Thursday notices to the federal government, the Oil and Gas Regulatory Authority (OGRA) and the Ministry of Law to submit their reply on a petition challenging the latest hike in prices of petroleum products.

The bench was hearing a public interest petition filed by Altaf Shakoor, the chairperson of Pasban Democratic Party.

Issuing notices to the federal government, OGRA and the Ministry of Law, the court adjourned the hearing until January 14.

*With additional input from PPI