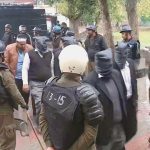 LAHORE/ISLAMABAD: After an attack at the Punjab Institute of Cardiology (PIC) Lahore, a joint meeting of lawyers representing various bodies of the legal fraternity severely criticised the media and charged it with partial reporting.

Some lawyers also raised slogans against the media at the meeting and demanded ban on media persons’ entry in the court premises. They also did not allow the media persons to cover the meeting. However, some senior lawyers stopped their junior colleagues from raising anti-media slogans.

The meeting condemned the attack on the PIC Lahore by a group of lawyers and observed that disciplinary action would be taken against the perpetrators if found members of any of the bars guilty.

The leaders at the meeting demanded immediate release of arrested lawyers and withdrawal of FIRs, which, they said, were fabricated.

A Joint Action Committee (JAC) comprising elected leaders of lawyers was also constituted at the meeting with the mandate to hold dialogue with the government and others. The JAC also held a meeting with LHC Chief Justice-designate Mamoon Rashid Sheikh for resolution of the matter. However, as per the sources, the meeting remained inconclusive.

At a press conference by the JAC members in the evening, PBC Senior Member Ahsan Bhoon announced a full-day strike across the country on Friday (today). He said protests would continue till release of all arrested lawyers.

He regretted that several meetings were held with the LHC chief justice-designate but all in vein. He said lawyers would not go to any chief justice anymore, but adopt legal course of action. Ahsan Bhoon said the elders of the bar had already condemned the PIC incident, but some elements had been trying to aggravate the situation.

The media was informed about the JAC meeting; however, when reporters reached there to cover it, they were not allowed to enter the Lahore High Court premises. They were simply told that the meeting had already concluded. Agencies add: The Islamabad High Court (IHC) on Thursday issued a show-cause notice to IHC Bar Association (IHCBA) Secretary Muhammad Umair Baloch for “professional misconduct and contempt”.

The IHC also suspended Baloch’s licence “to practice before [IHC]” until the next hearing, which will be held on December 19. Baloch was reported to have been forcing lawyers not to appear before judges as the high court’s bar association was observing a strike against alleged offences against the legal fraternity in Lahore a day earlier. The court noted that Baloch was “forcing the learned advocates to leave the court”.

“He continued doing so when the court proceedings commenced. He was asked to refrain from disturbing the proceedings and undermining the decorum of the court,” the notice read. “In response, he came to the rostrum and in a tone unbecoming of an enrolled advocate, he stated that instead of stopping him, the judges should encourage the strike.”

The court’s notice further said that other IHC judges had also reported that Baloch “interfered with court proceedings”. “This acts also amounted to depriving the litigants of the right of access to justice.”

Baloch, while talking to a reporter, said that IHC Chief Justice Athar Minallah told him not to observe a strike in the high court, to which the advocate responded, “When you (the judge) observed strikes and we used to be your followers, it was acceptable. Now it is not.”

He insisted that the lawyers were holding a “peaceful protest” but were “attacked” by the doctors. He went on to say that the lawyers’ reaction was in “self-defence”. He also criticised the media for “one-sided” coverage and warned that he will “impose restrictions” on journalists’ entry in the IHC. “As a general secretary, I am warning the media that if they continue with their one-sided coverage, I will bar you from the Islamabad High Court,” he said.