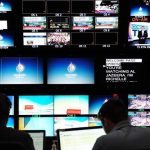 KARACHI- The Sindh government has im­posed a ban on officers espe­cially from police department to appear in media talks and tele­vision shows, sources said on Thursday.

The provincial authorities have issued a notification which was sent to 11 government departments including police forces.

According to the notification, Sindh govt officers and civil ser­vants have been restricted to interact with media and appear in any television talk show be­fore getting permission from the higher authorities.

Sindh govt will take legal ac­tion against those violating the law, the notification added.

In November, it emerged that the federal government was considering to impose a com­plete ban on use of social media by government servants during work hours.

This was told by National In­formation Technology Board (NITB) officials during a meet­ing of National Assembly (NA) standing committee on Informa­tion and technology.

It was said that not only the use of social media applications or pages including Facebook and Whatsapp would be banned dur­ing the office timing but the of­ficials would also be barred from bringing storage devices-USBs- to the offices.

The government employees will also be barred from indulg­ing in any part-time businesses, the NA body was apprised.

It was further told that Sindh govt was also mulling over to counter fake news pertaining to government orders and actions and a central server would be established at the NITB, for ful­filling the propose.

E-offices will be established at every ministry, which will be interconnected, they said. “Any official information would be shared on the server after prior approval of the federal authori­ties.”

This server would act as What­sapp and official videos, audios and photos could be shared on it after prior permission