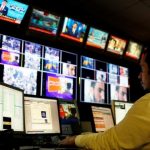 He also called for withdrawal of treason cases against journalists and it also made a resolve to foil all attempts to snatch the freedom of media and people. He said the declaration demanded that Jang-Geo Editor-in-Chief Mir Shakil-ur-Rahman and other media persons being held illegally be released immediately.

Earlier, Pakistan Muslim League-N supremo Nawaz Sharif said in his speech the media was the fourth pillar of the state and the opposition parties were facing blackout at the media. He regretted that journalists of print and electronic media were facing restrictions.

Pakistan People’s Party (PPP) Co-chairperson Asif Ali Zardari said he had never seen such stringent media censorship across the country, as they were not allowing live coverage of Nawaz Sharif. “This reflects on the weakness of the government. It is impossible to curtail the emerging voices of the media.”

PPP Chairman Bilawal Bhutto Zardari criticised the government over the state of media freedom in the country. “When the political leaders are not permitted to present their viewpoint, if the media is punished, then how do we expect that a common man can speak his mind,” he said. He said when the former prime minister and president did not have the right to speak in the media, then how come the common people could raise their issues.