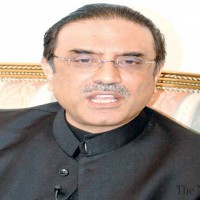 ISLAMABAD – Former president Asif Ali Zardari on Tuesday advocated freedom of expression, right to information and an end to crimes against journalists.

In a message on the World Press Freedom Day, to be marked today (Wednesday), Zardari said that there was a systematic erosion of freedom of expression in the name of ideology and national security on the one hand, and crimes against media persons were being committed with impunity on the other.

The Pakistan People’s Party (PPP), he said, stood by the journalists in their struggle to achieve twin objectives namely; “Right to freedom of expression as well as ending impunity of crimes against them.”

He said the freedom of expression and articulation of pluralistic ideas in a genuinely democratic set was necessary for a society’s progress.

Unfortunately, the PPP leader said that the freedom of expression had come under increasing attack by the state in the name of national security and by the non-state actors in the name of ideology.  “This indeed is the challenge of post 9/11 world that must be addressed urgently,” he said.

“When information flow is obstructed the citizen is disempowered,” he said.

The former president said that he was deeply concerned that the draft RTI Law unanimously agreed to by all political parties recently, had still not been brought before the parliament by the government. On the eve of the World Press Freedom Day, “I call upon the government to immediately bring before the Parliament the unanimously agreed legislation aimed at ensuring right to information,” he said.

Zardari said the PPP was also deeply concerned over the impunity with which crimes against journalists and media persons had been perpetrated.

“I urge all organs of the state to bring to justice the perpetrators of crimes against journalists and to set up credible mechanisms for ensuring their protection. I also wish to pay tribute to all those journalists who have braved odds, while performing their duties under difficult and dangerous conditions,” he added.