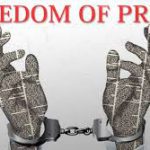 Three days ahead of the World Press Freedom Day, 2109, a reporter has been as killed in Dera Ismail Khan’s Parowa area. Malik Amanullah Khan, who had been the chairman of the Parowa Press Club, was a target in a drive-by shooting near Landa Sharif Adda on Multan-Dera Road. He died at the scene of the shooting.

72 journalists were killed in Pakistan from 2002 to 2018. According to the Pakistan Press Foundation as many as 48 of them are known to have been the intended target. Between 2003, when American journalist Daniel Pearl was kidnapped and killed in Pakistan, and 2013, trials in only five cases were concluded. Of the five murder convictions, three have been appealed.

The security of journalists in Pakistan, in particular, and all over the world, in general, is becoming a challenge to free press. According to the Committee to Protect Journalists, 1,340 journalists have been killed worldwide since 1992. The figures do not include the cases where motives were unclear. There were many cases also where journalists survived attacks or were injured. The latest phenomenon in this area in Pakistan is the kidnapping of journalists. A reporter from an Urdu daily has recently gone missing in Karachi.

Apart from physical threats over its 71 years, the press in Pakistan has been under coercive laws, even blatant censorship. Externally induced ‘self-censorship’ is becoming a new normal in many newsrooms. Many media houses have lost readers and viewers after refusing to follow ‘advice’.

Commercial interests are becoming silent agenda setters in the news sector. An economic recession has hit the media, resulting in a massive decline in revenues, causing lay-offs, salary cuts and payment delays. The cost of production has gone up and the governments have cut both ads and tariffs. The fourth pillar of the state is crumbling. Threats and challenges notwithstanding, the Pakistani press has come a long way. It has shown remarkable resilience to threats from non-state actors and has never shed its ability to question the powerful and digging out the truth. In difficult times, it has stood for regional and international peace. The journalists’ role in promoting peace and their quest for truth were recently acknowledged by the military’s public relations department. The World Press Freedom Day is also an occasion for soul searching. Many journalists still appear to need lessons in media ethics. The challenge of fake and misleading news is mounting. And yet, security of the working journalists is the most pressing issue. The government and the employers must invest in journalists’ training as well as their security. No newsperson should end up like Malik Amanullah. *