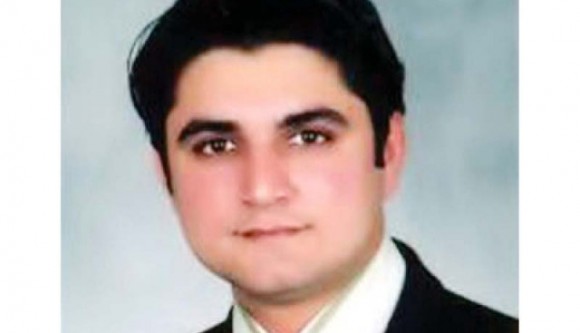 ISLAMABAD: Elder brother of slain Geo TV’s reporter Wali Khan Babar and main complainant in the murder case, Mohabbat Khan Babar, is being transferred to Islamabad following serious threats to him from target killers in case he continues pursuing the case.

Earlier, the government ordered shifting the case from a trial court in Karachi to interior Sindh to avoid any untoward situation as seven witnesses, prosecutors and police officials involved in the probe have already been targeted and killed.

Salman Mujahid Baloch is a defense lawyer of those accused in murder of Wali Khan Babar.

Federal minister for water and power Khawaja Asif has ordered requisitioning the services of Mohabbat Khan Babar for Islamabad Electric Supply Corporation (IESCO) following information about life threats to him and family. Mohabbat is currently posted as XEN in Baluchistan Development Authority in Lasbella and his transfer request is being treated on humanitarian grounds.

He wrote a letter to the minister apprising him of the gravity of situation and suggesting a way out as requisitioning his services in Islamabad.

“My younger brother was killed in Karachi by a notorious target killer group belongs to an ethnic group. Wali Khan Babar murder case is under trial in the anti-terrorist court of Sindh and I am the complainant of the case,” reads Mohabbat Babar’s letter addressed to Kh. Asif. At least seven eye-witnesses including a renowned lawyer and police officers have been killed by same target killers and now they are behind every individual related to this case, he further wrote.

“The target killers are continuously sending me and my family threats of being assassinated if I further pursue the case. I feel insecure myself and my family in Sindh and Baluchistan where they have their proven roots,” reads Mohabbat’s letter to Kh Asif. “I am incapable to continue my services there in Baluchistan or Sindh….where my family is residing for the last 30 years,” said Mohabbat.

Keeping in view the above stated situation and serious threats to our lives, reads the letter, my services may kindly be requisitioned as special case on humanitarian grounds against any post equal to my qualification and experience in the ministry of water and power.

Realising the trouble slain journalist’s family is suffering in efforts to bring the killers to justice, the minister referred the case to IESCO for comments.

The IESCO authorities agreed to accommodate him and sent a formal letter to Balochistan government in order to requisition his services. Officials privy to the case say that he will be immediately adjusted once they receive a letter of consent from the concerned authorities.