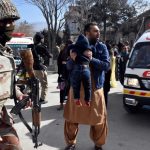 BADIN – Two persons were injured as some miscreants attacked the house of a senior journalist here on Saturday.

Following the incident, the local journalists held a protest demonstration against the attack on the journalist’s house and demanded immediate arrest of those involved in the incident. ‘More than 40 miscreants attacked my home and injured my two sons, who were present in the house at that time and harassed other family members as well,” the affected journalist told media. He said by the time he returned, the attackers had left his home. The senior journalist, along with his colleague journalists, got the complaint registered against Ayaz Mallah, Fayaz Mallah, Yar Mohammad Mallah and others. On the other hand, the journalists of Badin, including Malik Illyas, Tanveer Ahmed Arain, Murtaza Memon, Sawan Khaskheli, Imran Abbas Khuwaja, Ghulam Mustafa Jamali, Haroon Gopang, while condemning the incident, demanded the immediate arrest of the attackers, and warned that if those involved were not put behind the bars, they would be forced to intensify their protest. They stressed the IGP Sindh, DIG police Hyderabad, SSP Badin to take special efforts for the arresting of the involved miscreants elements and provide the protection to the journalist of district.