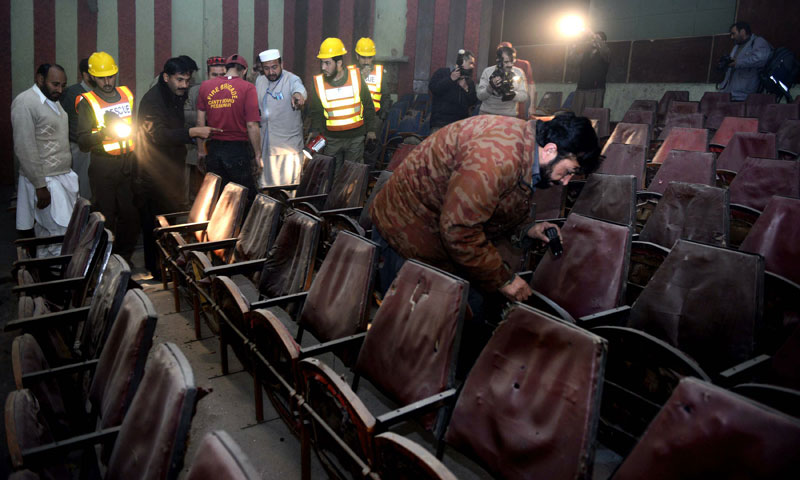 According to Dawn News, multiple explosions occurred when a show was ongoing in the cinema.

Subsequently, 11 people were killed whereas 19 others were injured, an official at Lady Reading Hospital, Syed Jameel Shah, said where the wounded persons were shifted by rescue sources for medical treatment.

An emergency was imposed in LRH and additional staff was urgently summoned.

Ahmed furthermore said three grenades were used and up to 80 people were in the cinema at the time of the explosions, according to news agency AFP.

Meanwhile, security forces cordoned off the site of attack whereas army personnel sealed the area from Shami Road.

Shama Cinema is situated in the busy Bacha Khan Chowk area of Peshawar.

The blast at the cinema came 11 days after a similar attack at Picture House Cinema situated in Kabuli Bazaar area of Peshawar.

The attack also came as negotiators for the federal government and for Taliban militants met for a second time today as part of efforts to end the bloody seven-year insurgency.

Scraps of human flesh, blood-soaked shoes and caps littered the floor of the hall after the blasts, an AFP reporter at the scene said.

Akbar Khan, 62, whose left arm and left thigh were injured, told AFP from his hospital bed that he was watching a movie when a deafening blast rocked the auditorium.

“It seemed like a hot iron rod pierced through my left arm and leg as I was hit by ball bearings,” he said. “I ran towards the gate, from where I was taken to hospital.”

Pakistani Taliban spokesman Shahidullah Shahid denied involvement. “We condemn the blast, its not our activity,” he told Reuters.

Awami National Party’s (ANP) leader Zahid Khan strongly condemned the attack and termed it a failure of security. He criticised the peace process and alleged that Pakistan Tehrik-i-Insaaf (PTI) chief Imran Khan was a liar, adding that people behind the bombing wanted to destroy the country.

Imran Khan said the blasts were an attempt to sabotage peace efforts.