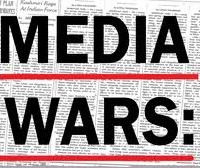 2014 has been one of the most difficult years for the Pakistani media. Due to the alarming, yet familiar, threats from militant groups, law enforcement agencies, and political parties, the Pakistani media remained bitterly divided.

The unprecedented reversals in media freedom include divisions between media organisations, which isolated the local media group. The ensuing viscous propaganda between said group and rival media badly tarnished of the image the media among the public. Having isolated the group, the distribution of the group’s newspapers and television channels was disrupted to an extent not previously seen in the history of the country.

The bickering between media groups overshadowed the loss of life they were collectively suffering. For instance, the fatal shooting of reporter Shan Dahar on December 31, 2013, in Larkana, Sindh, did not garner the attention it should have. He was short in the back and taken to a hospital where he remained unattended to until he succumbed to his injuries the next day. Only a handful of days later another private channel’s DSNG van was attacked on January 17, 2014 resulted in the death of three media workers.

In March, Raza Rumi faced a deadly attack – while he survived, his driver died in the attack. On August 28, 2014, unidentified assailants barged into the offices of a news agency in Quetta and murdered Bureau Chief Irshad Mustoi, reporter Abdul Rasool Khajjak, and accountant Muhammad Younas.

The largest number of injuries occurred on August 31, 2014, when 28 journalists, camera operators, and other media workers, were injured while covering the clashes between the police and the protesters during the demonstrations led by the opposition Pakistan Tehrik Insaf (PTI) and Pakistan Awami Tehrik (PAT).

The next day on September 1, 2014, protestors belonging to PTI and PAT attacked the offices of state owned Pakistan Television (PTV). They took over the control room and running broadcasts were disrupted for a few hours. Supporters of PTI also continued to harass and intimidate the staff members of a private news channel after PTI Chairman Imran Khan alleged that it was complicit in the election rigging that took place in 2013.

Perhaps the only positive aspect in all this could be the realization among the media that effective codes of conduct are needed for a more ethical and peaceful working environment. There is also a greater realization among media organizations of the need to cooperate with civil society and political groups. This is so the issues of media safety and stifled freedom of expression can be addressed.

On the positive side, the killers of Wali Khan Babar, a Pakistani journalist, were convicted by the criminal justice system on Saturday March 1, 2014. A Pakistani court convicted six men for Babar’s murder. He was shot dead in Karachi in January 2011.