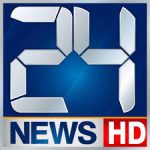 The transmission of Pakistani TV channel, Channel 24 and its sister channels, including City 42, City 41 Faisalabad and Rohi City News has been taken off air in many parts of Pakistan.

The Pakistan Electronic Media Regulatory Authority (PEMRA) ordered the cable operators to take channel off air after the journalist Najam Sethi in his program aired on March 28, 2019 claimed that the marital relationship between Prime Minister Imran Khan and his wife Bushra Bibi may be on the rocks after a verbal fight.

On March 29, the Information Minister, Fawad Chaudhry in a tweet has criticized the channel and Sethi over commenting on the marital life of Prime Minister Khan.

Two factions of Pakistan Federal Union of Journalists (PFUJ) condemned the closure of channels without issuing any notice.

The President of PFUJ, Afzal Butt and Secretary General, Ayub Jan Sirhandi in a joint statement the action of government was a direct attack on the freedom of media.

The statement added, “The PFUJ once again warns the government to desist from curtailing freedom of expression; otherwise the journalists’ community would do all within its power to defend it. We also call upon political parties and civil liberty organizations to raise their voice and stand up for the freedom of expression in this country.”

The President of other faction of PFUJ, G.M. Jamali also condemned this kind of censorship and said “Since coming into power, PM Imran Khan and his Government have used various tactics to try to subdue the media and this will not be tolerated.”

Talking to Pakistan Press Foundation (PPF), Aoun Shahi, Bureau Chief of Channel 24, Islamabad Bureau said the closure of channel started last week, – the channel was first off air in cantonment areas but now cable operators have taken the channel off air in many parts of the country.