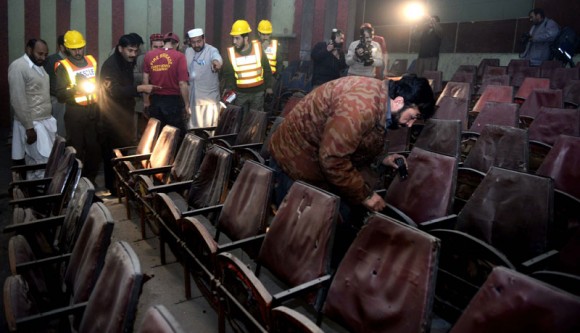 PESHAWAR: A teenager confessed to bombing Peshawar’s Shama Cinema before a local judicial magistrate on Monday and said he and his accomplice had hid hand grenades used in the terrorist activity under shalwar to deceive guards on the premises.

The bombings left 15 people dead and dozens injured on Feb 11.

Official sources said the 15-year-old suspect from Bara tehsil of neighbouring Khyber Agency told Magistrate Mohammad Ilyas Khan that he and his accomplice were injured in the stampede caused by the bombings.

They said the magistrate sent the suspect to prison on 14-day judicial remand until March 10 after recording his confessional statement under Section 164 of the Code of Criminal Procedure. The sources said the suspect was taken into custody by police four days ago from the Lady Reading Hospital, Peshawar, where they along with other injured were shifted after the blasts.

They said initially, police claimed that three blasts had taken place inside the cinema, but later it transpired that two explosions had occurred.

The investigation officer of the case had produced the suspect before an anti-terrorism court judge Anwar Hussain Khan amid strict security measures after completion of three-day physical remand.

The judge was told that the suspect had confessed to bombings and had expressed willingness to record confessional statement. The judge referred the suspect to the judicial magistrate for the purpose.

The sources said the suspect claimed in his statement that a Bara-based militant organisation had trained him before tasking him with attacking Shama Cinema.

They said the suspect said a member of the outfit provided him and his accomplice with hand grenades, while another dropped them outside the cinema on motorcycle.

The sources said the suspect said when he and his accomplice saw two guards bodysearch visitors at the cinema’s entrance, they went to a nearby shop, purchased sticking tape, used it to fasten the hand grenades with legs under shalwar and managed to enter the cinema.