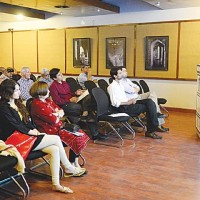 KARACHI: Renowned Israeli journalist, Amira Hass, who has spent decades documenting Israeli atrocities in the occupied territories of Palestine, once remarked that it was a reporter’s “job to monitor the centres of power”. Jean-Pierre Perrin, a war correspondent for more than 30 years argued in his talk held on Tuesday at the Alliance Française that it was this very duty, the act of witnessing and documenting blatant violations of war, that had become increasingly difficult with time.

A war correspondent specialising in the Middle East, Mr Perrin has extensively covered conflict in numerous countries and regions: Lebanon, Palestine, Israel, Iraq, Kurdistan, Libya, Egypt, Yemen, and Syria among many others. Beginning his career with the Iran-Iraq war in the 1980s, Mr Perrin has worked for the AFP, and currently writes for Libération and Politique Internationale.

The journalist pointed out that while it was easy “to be a political journalist in France or, for that matter, parts of Europe, it is more difficult to cover the Middle East”. He said that while the 1980s’ Iran-Iraq war was “one of the toughest wars” he had covered; he also had the rare opportunity to see a war first-hand.

At that time the concept of reporters embedding with one party or the other was less common and it allowed Mr Perrin to witness and report more freely. “Since the regime wasn’t organised, you could do whatever you wanted, and I ended up spending a lot of time at the front. I saw war for what it was really like: I saw lots of casualties and death.”

He had similar experiences when covering the Afghan war with the then Soviet Union in the late 1980s. “At that time the mujahideen didn’t question which newspaper you worked for, and what you wrote. It was very easy to embed with the [Afghan] mujahideen. It was a struggle but I have good memories of that time. You had to walk for weeks, and it was difficult to communicate since the mujahideen didn’t speak English. But they were good companions, and they took care of you.”

In the current conflicts in the Middle East, he said, this sort of reporting, where the correspondent could cover both sides, switching as they wish, was becoming increasingly difficult. “I don’t think we can cover [now] without embedding with somebody [some party]. For instance, it’s easy now to embed with the Americans, but then you can’t cover both sides. It is very pitiful to cover only one side.”

One of the reasons it had become increasingly difficult to report without embedding, Mr Perrin emphasised was due to journalists becoming targets themselves. For instance, after he left his post in Baghdad in 2006, the colleague who replaced him was kidnapped by Iraqi militants.

The Syrian conflict, Mr Perrin said, became difficult to cover for similar reasons. “I haven’t gone back to Syria since 2013. If you do go, you will be kidnapped in two to three days.

That’s why no reporter has gone. It is quite difficult for me to go back to Aleppo: two of my good friends were kidnapped in Syria. And in 2013, my colleague [the war correspondent] Marie Colvin and my good friend, Remi Ochlik, were killed. I was spared because I had left a day before.”

In a sharp contrast to Iraq and Syria, the easiest conflict to report on, according to the reporter, is the Israeli-Palestinian conflict.

The main reason, Mr Perrin said, was due the small size of the occupied territories of Palestine and an ease with which reporters could cross the border.

“You can go from reporting on a demonstration in Ramallah or Jenin [in the West Bank, Palestine] in the morning to Israel in the evening.”

The French war correspondent ended his talk on a bit of a downer saying that he was not very optimistic about the current conflicts in Syria and Iraq. “I have no hope because so many countries are involved — Iraq, Turkey, Russia, Jordan, Saudi Arabia, Qatar and Kuwait.

One of them, some of them, or all of them, have interests in making the conflict longer. I also don’t see reconciliation between the different communities in Iraq; torture is like an institution now. You torture [your captive] because you like it, because you want to break him, because you derive pleasure from it.”