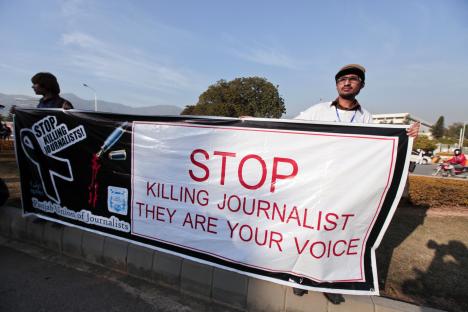 Pakistan’s journalists are feeling the after-effects of a brutal attack on Express Media, the third and most lethal attack on the media group and its staff in the last six months. The Taliban has claimed responsibility for the attack, and has issued a fatwa (decree) warning of further attacks against media outlets that they say are providing “misinformation” against them.

On 17 January 2014, four gunmen riding on motorcycles opened fire on the Digital Satellite News Gathering van of the Express News TV channel, which was stationed in the suburb of Nazimabad in Karachi.

Technician Waqas Aziz Khan, driver Muhammad Khalid, and security guard Muhammad Ashraf were seated in the front of the van. The young men, all aged less than 30, were shot multiple times at close range and rushed to hospital where they were pronounced dead. A cameraman who had been seated in the back survived the attack.

In response to the incident, the government created a two-member committee, consisting of the Minister for Information and Broadcasting and the Interior Minister, and tasked it with consulting media houses and journalists’ bodies on how to devise a security strategy for journalists.

The president of the Karachi Union of Journalists (KUJ) lamented that the media continues to be targeted “while those in power are playing the role of a silent spectator”.

The day after the lethal attack, protest demonstrations by journalists, photographers, camera operators, politicians and civil society activists were held in Karachi and other cities. While speaking to the demonstrators, Amin Youssuf, secretary general of the Pakistan Federal Union of Journalists (PFUJ), announced a 10-day mourning period during which black flags would be hoisted outside press clubs throughout the country. A few days later, the group called for a hunger strike for 23 January, to protest the fact that the killers have not been arrested and proper compensation has not been given to the families of the assassinated journalists. The PFUJ asked unions throughout the country to participate.

Kamal Siddiqi, editor of the Express Tribune, told the Committee to Protect Journalists (CPJ) he could not point to any specific reports that could have led to this latest attack. The outlets that form part of the Express News media group report critically on politics, crime, and international affairs, and have periodically received threats, CPJ reports.

Soon after the attack, in a live telephone call to the anchorperson of Express TV, Ehsanullah Ehsan, former spokesman for Tahreek e Taliban Pakistan (TTP), claimed responsibility for the killings. According to the Pakistan Press Foundation (PPF), Ehsan accused the Pakistani media of having “assumed the role of the opposition” by spreading “venomous propaganda against the TTP”. The spokesman warned the media that they must side with the TTP in this war of ideologies or face more attacks.

An attack on the whole media

Analyst and director of media development at Civic Action Resources, Adnan Rehmat, told Index on Censorship that he believes the attack on Express News was “meant to browbeat and cow down a media that is becoming more outspoken and starting to criticize the Taliban.”

Omar Quraishi, editorial page editor at the Express Tribune, agreed that this was a message “to the whole of Pakistan’s independent media . . . What needs to be understood by all journalists and media groups an attack on Express Media group is an attack on the whole media.”

The TTP’s message that any media seen to be “biased” against them would face attacks poses an ethical conundrum. As Index on Censorship pointed out: “How much airtime to give to the Taliban to keep them appeased?”

“Media is now confronted by a double whammy challenge – wail about terrorism while simultaneously giving air time to those who perpetrate this violence,” said Fahd Hussain, news director at Express News.

The stakes suddenly became a lot higher as of 23 January. Dawn newspaper reports that the TTP, for the first time since its inception in 2005, has issued a fatwa (decree) against the media and prepared a media hit-list. The 29-page fatwa accuses the media of “siding with the ‘disbelievers’, against Muslims, in the ‘war on Islam’ and inciting people against ‘the mujahideen’ through propaganda as well as of propagating promiscuity and secularism,” according to Dawn.

The initial hit-list names nearly two dozen journalists and publishers. It includes the names of a number of media-group owners, the news heads of various television channels, prominent anchors, the editor of a leading English-language newspaper and even some field staff.

“Even at this stage the media could mend its ways and become a neutral entity,” Ehsan reportedly asserted. “Otherwise, the media should not feel secure. A few barriers and security escorts will not help. If we can get inside military installations, media offices should not be too much of a challenge,” he threatened.

Lack of action on previous attacks

The authorities’ inability or unwillingness to bring perpetrators of previous attacks on the Express Media group to justice only heightens the concern for the media. In December 2013, two staff members were injured when explosives were thrown at the group’s offices in Karachi. And in August, gunmen opened fire at the entrance of the group’s offices. Despite visiting the Express Media office in Karachi twice and setting up investigation teams to probe the two earlier incidents, not a single perpetrator has been arrested, the International Federation of Journalists (IFJ) reports.

Referring to the December attack on the Express Media group, Ehsan of the TTP reportedly said: “We had not incurred any loss of life so we attacked them again.”

“If those involved in previous attacks [against Express News] had been caught, perhaps they would not have been emboldened to continue this campaign against the media,” said Owais Aslam Ali, PPF secretary general.

In a 21 January letter to the Prime Minister, the International Federation of Journalists (IFJ) said that “the government of Pakistan has failed in its duties to protect media workers when the realities for them are all too apparent . . . these brave journalists continue to try to do their jobs knowing death is a real repercussion.”

Pakistan ranked 159th out of 179 countries in the 2013 Reporters Without Borders press freedom index. It has been one of the world’s worst nations in combating deadly anti-press violence, CPJ’s Impunity Index shows. Condemning the actions of attackers is “no longer enough”, the IFJ stressed, if Pakistan wants to tackle its rank as one of the deadliest countries in the world for journalists. In October, IFJ launched the End Impunity campaign to seek justice for journalist killings in Pakistan, Iran and Russia.

A final word of caution comes from Quraishi, of the Express Tribune. He is quoted in Deutsche Welle as saying that “while only one organization has been attacked so far, journalists, society and the state need to understand that this is part of an assault on the whole media, and time for them to get united and deal with the threat head on.”