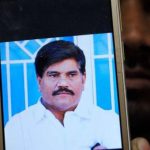 Slain journalist Aziz Memon’s body exhumed in the presence of sessions court judge presiding over the case on Sunday. The body of the deceased journalist who has been claimed to have been killed under controversial circumstances was taken to the coroner’s office for an autopsy.

DNA samples and specimens have been taken from the dead body to determine whether the journalist actually murdered or suffered a natural death as security officials tasked with investigations claimed. A three-member medical panel led by the medical superintendent of the PMC Hospital Nawabshah conducted the tests.

The provincial health secretary, Kandiaro judicial magistrate, members of the joint investigation team (JIT) probing the alleged murder were also present during the exhumation of the body. Earlier this week, a local court had approved a request by the JIT to exhume the body for an autopsy.

The head of the Joint Investigation Team (JIT) probing journalist Aziz Memon’s alleged killing sought permission from the court over recommendations of senior doctors to conduct his post mortem again. The investigation team said they found many flaws in the previous post mortem report, which declared the cause of death suffocation but it did not mention more details of how he died.

The Express Tribune: Journalist’s body exhumed for another postmortem