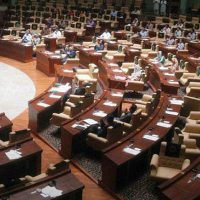 KARACHI: The Sindh Assembly on Friday unanimously passed a resolution calling upon the federal and provincial governments to immediately release payment of the outstanding advertising dues of the media organizations to save them from further crisis severely affecting their employees. The resolution was moved in the house by MPA of ruling Pakistan People’s Party Burhan Chandio.

Speaking on the resolution, Sindh Chief Minister Syed Murad Ali Shah said the PPP Chairman, Bilawal Bhutto Zardari, during his recent visit to the Karachi Press Club had also spoken for clearing the provincial government’s dues to the media houses to save them from crisis especially being faced by the journalists and other staff of the newspapers and the TV channels. Murad said he has already announced clearing of the outstanding advertising dues of the Sindh government but they would be linked to the payment of the pending salaries and the continuity of the jobs of the journalists and other staff members of the media organizations. The chief minister said his government is conducting a third-party audit of its advertising dues to determine its actual amount and the payments would be made after the third-party audit and the release of these dues would remain linked with the salaries and protection of the jobs of journalists and other media workers.

Murad said the TV channels could go for delaying or curtailing the salaries of the programme anchorpersons enjoying high perks but their managements should not delay or reduce the salaries of their staff members drawing monthly salary of less than Rs100,000. The CM said the journalists, newspapers, and Press Clubs have always performed a leading role in struggle for a democratic dispensation and the PPP has a very close and very cordial relationship with the print and electronic media.

Leader of Opposition in Sindh Assembly Firdous Shamim Naqvi belonging to Pakistan Tehreek-e-Insaf said the federal government should readily pay its advertising dues if there are outstanding amounts but that should be linked with the payment of the pending salaries of the media workers facing immense problems. Naqvi said the journalists, media workers, and staff members of the TV channels should not face economic hardships. The PTI leader suggested the resolution should be amended to link the payment of the advertising dues of the federal government with the pending salaries of the media workers especially those earning less than Rs 50,000 in a month. He said the retrenchments and downsizing in the media organizations is highly deplorable and efforts should be made to reverse the alarming trend.

Several other concerned lawmakers also spoke on the resolution stressing that the journalists and media workers should not face financial problems due to delay in their salaries owing to unpaid advertising arrears of the governments.