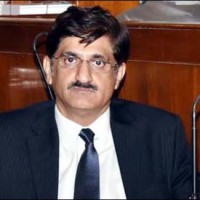 Democracy cannot flourish without the freedom of the press. Freedom of expression is imperative to the development of a country and a society.

These views were expressed by Sindh Chief Minister Syed Murad Ali Shah while speaking as the chief guest at the first session of a seminar titled, “Critical minds at critical times”, which was held at hotel on Saturday as a follow-up to World Press Freedom Day which was observed on May 2.

In this context, he said that the Pakistan Peoples Party had always staunchly believed in press freedom. He recalled the late Benazir Bhutto’s contribution to press freedom and said that she stood up to the dictator Pervez Musharraf and fought his emergency singlehandedly because that was an anti-democratic step.

However, Shah said it could not be denied that there were certain issues we must turn our attention to. One of these, he said, was that electronic media anchors did not seem to have the basic requisite training or orientation.

As regards security for journalists, he said that sadly enough journalists were not even registered with the Employees’ Old Age Benefits Institution (EOBI), and for this he condemned the newspaper owners.

He said that there should be norms and a code of ethics for the social media too.

Talking about the security of journalists, the chief minister said a senior journalist was grievously injured in the Lal Masjid operation. He was working for a foreign organisation. So, the organisation paid his treatment bills in full and compensated the family monetarily.

The chief minister lamented that there was no such arrangement in place for journalists working for national dailies and media. He lamented that the state just did not bother to have the labour laws implemented and did nothing for the security of journalists and their families.

He said it was sad the institution of the editor was eroding fast. He said that there were constant pressures of various kinds on journalists as a result of which, apart from those who died violent deaths, many journalists ended their earthly tenures prematurely.

Noted TV and print media journalist Nasira Zuberi lamented that one of the reasons for the sad state of journalism was the fact that there were no training institutes for journalists.

Noted journalist Imtiaz Alam said that the right to information, or the right to know, was the prerogative of every citizen. He regretted that media was not a mission anymore; it was a source of lucrative livelihood.

He said that media was also responsible for its own troubles and in this case cited the inter-media spat of two years ago when a certain channel was actively working against another channel.

In the second (post-tea) session, Sindh Governor Mohammad Zubair said that we all were overly critical of ourselves and reminded the gathering that among all the Muslim countries, Pakistan was the one with the greatest freedom of the press and the electronic media. He said criticism had to be balanced.

He regretted that most anchors today did not seem to be aware of the performance evaluation yardstick.

Replying to the contention of a previous speaker that there was no opposition in the country and if there was one, it was just a benign, “friendly” opposition, he said: “Ask us who have to deal with the opposition daily.”

Parliamentarian Mehtab Akbar Rashdi said that the foremost prerequisite of journalism was neutrality, but unfortunately on account of the long periods of autocratic dictatorship, we had lost track and had totally lost neutrality. Besides, she said, tycoons could never be neutral.

Senator Saeed Ghani of the Pakistan Peoples Party said that the commercial interests of tycoons posed a big hurdle. “Media are most hurt when tycoons treat journalism as a money-minting machine,” he said.

Karachi Press Club President Siraj Ahmed said that today the media were involved in a mad race for ratings, as a result of which credibility was suffering.