Home » Featured » SHC verdict in Pearl case will be challenged, FM tells US 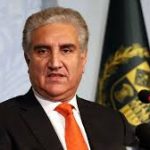 ISLAMABAD: Foreign Minister Shah MehmoodQureshi on Saturday assured the United States the government would challenge the overturning by the Sindh High Court of the death penalty handed down earlier to the main accused in murder of journalist Daniel Pearl.

In a statement, MrQure­shi said there is an appellate forum (the Supreme Court) where the verdict would be challenged, but it would be up to the apex court to uphold or set aside the high court ruling.

The foreign minister said the high court decision had led to concerns.

The Sindh High Court had on Thursday quashed the death penalty awarded by a Hyderabad anti-terrorism court to Ahmed Omar Saeed Sheikh, the main accused in the murder of Wall Street Journal reporter Daniel Pearl in 2002. The court instead sentenced him to seven years in jail for kidnapping the journalist.

The high court also acquitted three other accused in the case — FahadNaseem, Sheikh Adil and Salman Saqib, who were earlier sentenced to life in prison.

The high court announced its decision on the appeal of the accused after 18 years. Sheikh had been in jail all along. This meant that he had already served the seven-year prison sentence.

The provincial government, meanwhile, detained all four under a public safety law for at least three months, blocking their imminent release from jail.

A statement issued by the US National Security Council said: “We condemn the Pakistani court’s decision to overturn the sentence of those convicted of the gruesome murder of WSJ reporter Daniel Pearl and welcome the prosecutor’s decision to appeal. The US is committed to pursuing justice in all cases of terrorism against American citizens.”