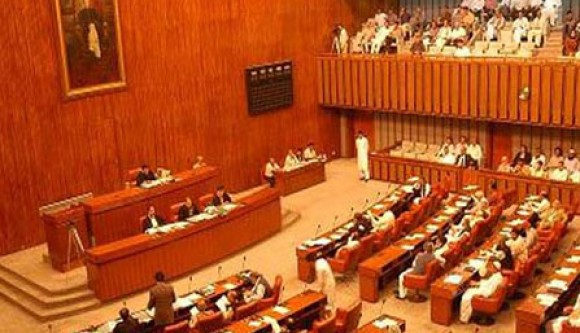 ISLAMABAD: Lawmakers in the Senate on Monday vehemently opposed shutting down of Geo TV, warning that if this was done, the media would weaken, and the resulting situation will be threatening to democracy.

Senators were intrigued over the process of bringing people on the roads and provoking them about a morning show by Geo entertainment channel. They wondered why the matter was not being put aside after the channel and its anchorperson had publicly apologised to the nation and, above all, sought forgiveness from Allah Almighty.

Leader of the Opposition Aitzaz Ahsan said he was ready to play his role in the constitution of a House committee to douse the raging fire among various media houses. The proposal to this effect was floated by PPP Senator Farhatullah Babar, who wanted the Senate to play its role in defusing the situation between the media groups.

Senators expressed their views on a joint motion moved discuss the political situation developed recently due to certain reasons.Senators saw the situation created against Geo and the Jang Group as the part of a larger conspiracy to derail the incumbent political system. They urged other TV channels to be mindful of the likely cubs on the freedom of expression in case, Geo was banned.

They were concerned over divisions among the TV channels and underlined the need for sorting out their differences to see media as a strong pillar of the State.PPP Senators Aitzaz Ahsan, Mian Raza Rabbani, Farhatullah Babar and Saeed Ghani alleged their party and leadership had been the main target of Geo and the Jang Group, but they were strongly against putting curbs on Geo.

They noted what the channel had shown immediately after the assassination bid on noted anchorperson Hamid Mir was totally wrong and improper but once the matter was taken by Pemra following the filing of a complaint by the Ministry of Defence, the situation should have eased out but instead, it was further allowed to escalate.

“I fear if things are let moving as they are. What will be the result? A lynch mob may torch a Geo van along with those on board one day. Only then the nation will be in shock and the anchors and religious people will say, they did not say anything wrong,” Aitzaz warned.He wondered how those sent notices by the courts would appear before the courts in the given situation with risks lurking around.

About other TV channels, Aitzaz said tomorrow they could also unintentionally make a mistake while referring to the Geo and Jang Group’s apology on the morning show. He wondered how anyone could say the doors of seeking forgiveness were shut while the Almighty is Ghafoorur Rahim and Rehmatulil Alameen is His Prophet.

“There must be no ban on Geo, otherwise there will be ban on the freedom of expression,” the veteran lawmaker maintained.He termed certain anchors as small pharaohs within themselves, who always looked to impose their opinion on their guests.

Aitzaz regretted that Pakistan was fast becoming lepers’ colony, curbs were being imposed, no cricket team or player was ready to visit Pakistan while businessmen wanted meetings abroad.

Earlier, opening the debate, Rabbani strongly warned against any bid to bring changes in the federal parliamentary system enshrined in 1973 Constitution and said all democratic and progressive forces had consensus thereon. He said Pakistan’s survival would be at stake as a Federation, if quasi presidential, dictatorial or technocrat or any form of system was imposed on the nation.

He pointed out in Khyber Pakhtunkhwa, urban Sindh and Punjab, religious militancy, sectarianism and intolerance was nurturing and by using name of Islam, political agenda was being furthered and said the security forces along could not face this challenge unless all political forces and the masses stood by them.

In case, political system was to be replaced with dictatorship, centralisation of power would take place, provincial autonomy and devolution process would be rolled back and the sense of deprivation that had been addressed to a certain degree would be back with more intensity.

He referred to Pakistan Tehreek-e-Insaf and Pakistan Awami Tehreek rallies and protests after one year following the general election and said they also had their reservations about poll transparency but would never allow derailment of the system.

Rabbani said how the entire poll process was made questionable and the role of ex-CJ and the Election Commission was criticised in a systematic manner and now the media, which could be a check on the system and work as a watchdog, should not be subjected to any curbs.

He recalled how the general elections were made controversial and Pakistan National Alliance movement was launched and then given a religious turn, and if today the situation was carefully studied, things appeared to be moving on that direction and signs were ominous. Rabbani urged the democratic, political and progressive forces to have soul-searching as this time, not the Constitution but the Federation was at stake.

Farhatullah Babar pointed out that the situation being evolved after the controversial content on a Geo channel, with PTI and PAT taking to streets, and a the sane elements their serious reservations over the way DG ISI image was shown on Geo TV and hurling allegations at him was improper.

However, the senator said it was unfortunate that the allegation was hurled at an institution that had faced such allegations before at the Supreme Court, the Parliament and its committees and the Commission of Inquiry on Enforced Disappearances, and the same was levelled by a channel in a hurry that was totally wrong.

The senator was personally concerned over the media being at loggerheads with itself and said this way, the pillar would be weakened, and regretted some media houses were undermined by other rivals and hence were weakening themselves.

He thought some other media houses would come forward to sort out matters and added the House should not detach itself from the threats being posed to democracy and in the given situation; the Senate should play its role and the Leader of the House and the Leader of Opposition should form a panel to look into the matter.

“If things moved forward as they appear to be, the media may collapse, and then democracy would be under threat,” he cautioned.

Saeed Ghani and Abdul Rauf of PkMAP called for defusing the situation and letting the Pemra to decide on the complaint filed by the Ministry of Defence. Abdul Rauf regretted that some channels were waiting for shutdown of Geo so that they could increase their ratings.

Speaking on a motion, he moved, Senator Babar called for urgent revamping the Pakistan Olympic Association (POA) in the light of the national sports policy adopted by the cabinet and duly endorsed by the Supreme Court SC and the recommendations of the sports federations and the Senate Committee on Inter-Provincial Coordination, failing which, he said, a disturbing signal will be sent that a lone individual can hold to ransom the country’s institutions with impunity.

The House then unanimously adopted a resolution moved by him calling upon the government to uphold ‘at all cost’ the national sports policy. The resolution said: “This Hose calls upon the government to uphold the National Sports Policy, the decision of the cabinet, the verdict of the SC and the recommendations of the sports federations and the Senate committee in dealing with the matters of Pakistan Olympic Association. It further calls upon the government not to succumb to any pressure, intimidation and coercion, internal or external in implementing the sports policy in letter and spirit.”

Earlier, in their speeches, senators from both sides of the aisle, called for giving top priority to sports in the country, as space for playgrounds and stadiums was shrinking owing to commercial reasons and terrorism. Senator Kulsoom Perveen BNP-Awami referred to a cartoon, which appeared in Daily Jang on Monday about how PCB matters were being handled. Saeed Ghani said on the opposition of a political party, no one had the right to ban any channel.