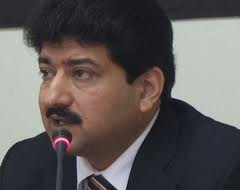 ISLAMABAD: Senior journalist and anchorperson of Geo TV Hamid Mir on Monday appeared before the Judicial Commission in the Supreme Court and recorded his statement.

Clad in blue shirt and light blue trouser, Hamid Mir was accompanied by his brother Amir Mir, the National Press Club president and a large number of journalists, chanting slogans in favour of the brave journalist.

Later, after recording his statement before the commission that lasted for over one hour, Hamid Mir left the Supreme Court.On April 21, Chief Justice of Pakistan Justice Tassaduq Hussain Jillani, after formal request from the government, had approved the names of three judges of the Supreme Court for Judicial Commission that is investigating the incident of attack on Hamid Mir.