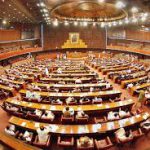 ISLAMABAD  –    On the World Press Freedom Day, the Senate Friday passed a unanimous resolution reiterating that access to transparent and reliable information is the cornerstone for building fair and impartial institutions, holding leaders accountable and speaking truth to power.

The house through resolution jointly drafted by treasury and opposition benches recognised the fundamental human right of press freedom and paid tribute to the journalists, editors and publishers “who risk their lives in defence of the public’s right to know.”

“This house reaffirms its strong commitment to the freedom of press and expression, since it is an article of faith for every democracy,” the resolution said.

“The house salutes the media martyrs who laid down their lives in the line of duty and affirms its complete solidarity and support to the media workers in their just struggle for security of life and service so they can perform their professional duties without any hindrance or constraints.”

Earlier, rules were suspended to allow the Leader of the House Senator Shibli Faraz to move the resolution. Before the resolution was moved, Chairman Senate Muhammad Sadiq Sanjrani in his remarks asked the government to play its role for resolving issues of payment of media workers’ dues and the protection of their jobs.

“The press gallery in the parliament reminds us the transparency and accountability by the public.  The media workers are executing their duties while endangering their lives and many of them are working in an insecure environment,” he said.

Sanjrani while presiding over the session remarked that journalists have their hands on the pulse of the society. “They can mould the society towards any behaviour they intend to through the media of mass communication. A free press can therefore be a guarantor of a flourishing society.”

May 3 which was proclaimed as World Press Freedom Day by United Nations General Assembly in 1993 celebrates the fundamental principles of press freedom, to evaluate press freedom around the world, to defend the media from attacks on their independence and to pay glowing tribute to journalists who have lost their lives while discharging their duties.

Speaking on the occasion, lawmakers criticized the government for imposing restrictions on media. They stressed that media workers were in act suffering due to the ruling Pakistan Tehreek-e-Insaf (PTI)’s decision to abruptly impose a cut on official advertisements being released to the media houses. They said that this has resulted in the decrease of revenues of media industry which caused layoffs of workers, pay cuts and delay in the release of salaries.

Former Chairman Senate Mian Raza Rabbani while speaking on the issue said any media censorship amounted to violation of the constitution as it recognized press freedom as a fundamental right. He regretted that the present government had adopted a new method of censorship by using advertisements as a tool to pressurize the media. He said the parliament should amend the law with respect to implementation of wage board award. Senator Javed Abbasi said the media gave wide coverage to PTI’s sit-in, but it became the party’s first victim after coming into power. He said even if the government had some score to settle with owners of media houses, it should resolve the problems facing the journalists. Federal Minister for Parliamentary Affairs Azam Swati said freedom of press couldn’t be separated from democracy. The media plays a role in rise and fall of nations, he said.

Leader of the House Shibli Faraz said that the impression was wrong that PTI government had victimized the journalists and was behind their finical woes.

The News: Senate reaffirms commitment to freedom of press