Home » Featured » ‘Self-censorship flourishes in environment of fear and intimidation’ 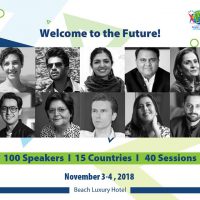 The two-day School of Tomorrow event ‘A World of Tomorrow Reimagined’ kicked off at a hotel on Saturday.

The session titled “Freedom of Expression: Where Do We Draw the Line?” was moderated by journalist Mehmal Sarfaraz and had artist Salima Hashmi, Nida Mushtaq of Feminist Collective and senior journalist Ghazi Salahuddin as panelists.

Defining the concept of freedom of expression, Hashmi said that for her firstly it was about the independence to imagine.

“When it comes to artistic freedom, it is the freedom to imagine and create and share the fruits of that creation with the rest of the world. I feel the right to show and disseminate is very important. However, not just here, in every part of the world, there are some cultural lines which are drawn and an artist challenges those very lines which are the comfort zone of a society,” she said.

She added that cultural freedoms were also tied with socioeconomic rights of the individual. Speaking about her initiative, she said Fearless Collective brings art to the streets.

“We take the narratives of non-cis people to the streets using their stories and their imagery. We do think about the colours we would use as well as the image we would be putting across the wall if it’d be acceptable by the people or not so the freedom to imagine is indeed very important,” she said.

She also pointed out that despite having the content to showcase, events often showed videos which were made by the Global North, which also hinted at the limitations to portray the art.

Salahuddin said that it was an irony for a journalist to speak about the freedom of expression owing to the times we were living in. Referring to the past when he worked as a journalist during dictator Zia ul Haq’s times, he said those were tough times for the media, but now it was one of the worst times for journalists in Pakistan.

“There are restrictions from the state, owners, establishment or the religious extremists and one can try to write between the lines, but still the oppressive measures are very visible.

“Also, when it comes to cultural freedom we need to understand that the freedom of expression is deeply rooted in the freedom of thought for everyone. We have a moral, cultural and intellectual deprivation which affects and curtains the freedom,” he said.

Speaking about the restriction on satire, Nida Mushtaq was of the opinion that despite being called a security state, it was the insecurity of leaders who got offended by humour and felt that their egos had been bruised. She added that in artwork, she and other artists used affirmative words instead of being preachy about the subject and tried to infuse poetry as well.

Speaking about the current media scenario again, Salahuddin said he was highlighting the worsening condition because previously journalists knew about the restrictions.

“Earlier, we knew the rules of the game but now we know nothing. Also previously, we were taken to jails and were treated like political prisoners, whilst now people just go missing or get threatening phone calls. Due to this, journalists are self-censoring and self-censorship flourishes in an environment of fear and intimidation,” he said.

He also felt that the editorial control was being compromised and the owners were getting more powerful despite the role of publisher and editor being adversarial.