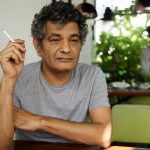 Award-winning satire “A Case of Exploding Mangoes “by   journalist turned novelist Mohammed Hanif  about Pakistan’s former Martial law administrator /president Gen Zia-ul-Haq has been confiscated in a raid on the publisher and the author  is reported to receive a defamation notice from Gen Zia’s son. The book allegedly, pokes fun at the country’s former military dictator, and others in the armed forces.

The author Mohammed Hanif said on Twitter that some people claiming to be from the ISI barged into his Urdu publisher Maktaba Daniyal offices, confiscated all copies of Urdu translation of A Case of Exploding Mangoes. He said the manager had been threatened and the officials had demanded information on his whereabouts. Hanif also said security agents seized stock from his Karachi publishers and bookshops in Islamabad and Lahore.

The book has been recently published in Urdu in Pakistan, despite having been launched to acclaim in English in 2008, when it, was long-listed for the Man Booker prize. The book won the Commonwealth first book prize in 2009

The book caricatures the final days of Gen Zia-ul-Haq and the conspiracy theories behind the plane crash that killed him in 1988, including the rumor, a bomb was smuggled aboard in a box of mangoes. .

The information wing of Pakistan’s military said the military had not taken action against the book and an official at the ISI told Associated Press the comments were a “cheap attempt to gain popularity by hurling false accusations on a national institution”..

The incident was immediately condemned as the latest example in a crackdown on freedom of speech in Pakistan. The Human Rights Commission of Pakistan called on the authorities to “revoke this action immediately”.