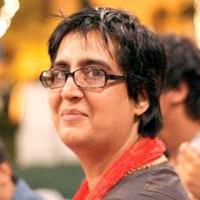 KARACHI: At ‘Unsilence Pakistan: A Tribute to Sabeen Mahmud’, the murdered activist was remembered first under the fading light and then the starless night sky at Arts Council’s open-air auditorium. It was an event of tear-filled eyes, of choked throats, of reminiscent nods and of fond memories left behind. An event where Sabeen’s legacy was carried on.

It was fitting then that the opening speaker was mentor Zaheer Kidvai – the man who saw Sabeen become the woman she became.

“Never have I seen a woman more capable of doing whatever she set herself to do,” said Kidvai. “She wanted to change the country, she wanted to help.”

Two speakers later came writer Muhammad Hanif, bringing with him all of the wit he is renowned for. “We journalists are told to add the word ‘alleged’ before any fact we are not sure of or when we want to protect someone’s reputation,” he started off. “So when the journalists in the audience publish this tomorrow, please add the word ‘alleged’ wherever you see fit in order to save me.”

But that light humour and sharp wit was only building up what he was going to say next; a rhetorical question – half to himself, half to the audience – that lingered uncomfortably in the thoughts of all who heard it. “Sabeen’s last show was ‘Unsilence Balochistan’ and this one is ‘Unsilence Pakistan’. I don’t know whether this is a step forward and we are now trying to cover the entire country or whether it is a step backwards and we are afraid of highlighting Balochistan,” he said, before perhaps answering his own question. “I guess some part of us is scared.”

Like most of Hanif’s monologues, this too included topics and individuals unpublishable – discussing the greed, corruption and fear mongering of media moguls, the army and religious leaders – but too often he struck close to home. “Balochistan is a topic that we must avoid in order to survive in this country,” he said. “And those who raise it outside the country are branded traitors.”

The wit of Hanif gave way to the passion of bonded labour activist Veeru Kohli and Baloch rights activist Mir Muhammad Ali Talpur. The latter was part of the talk at T2F after which Sabeen was gunned down on April 24. “That day we were the ones who talked about Balochistan, and she was the one who paid the ultimate price,” he said, a voice filled with emotion and perhaps misdirected guilt. “But it is something that needs to be talked about. As they say, ‘What you allow is what will continue’. “Wo shaks hi kia jo der jaye halaat ki khuni gardish se. Us daur me jeena lazim hai jis daur mei jina mushkil ho.”

Talpur did, however, have a parting warning for ‘those who are destroying Balochistan’. “Though the mills of God grind slowly. Yet they grind exceeding small.”

Professor Dr Pervez Hoodbhoy took the stage shortly after. “I was introduced to Sabeen some 15 years ago,” he said. “But I stand not alone in being hurt at her murder. I wanted to criticise certain organisations but they told me to instead focus on the National Action Plan.”

Hoodbhoy’s words, direct and upfront as they were, may have earned him the ire of some. “Interior minister Chaudhry Nisar said that 10% of all seminaries are promoting and instigating terrorism in the country. That is an alarming large number but it highlights the government’s weakness that they backed down on their decision to take action against such institutes on Fazlur Rehman’s demands.”

Human Rights Commission of Pakistan director IA Rehman was the last speaker on the night. “I am happy to say that Sabeen’s work continues,” said the 85-year-old. “They took her life but they cannot take away her work and her ideas.”

However, Rehman bemoaned the streak of violence present in Pakistani society. “Once we used to hide our murderers, now we flaunt them with pride,” he said, before taking a gander at the reason for this increase in bloodshed. “Non-state violence is nothing more than the reflection of the state’s violence.”

As the clock ticked towards the event’s end and the last of the speaker had left the stage, it was clear that the echoes of Sabeen rang as loud, clear and proud as they ever had; but after hearing the speakers highlight the plethora of problems facing Pakistan, the echo seemed but hollow in this festival of chaos.