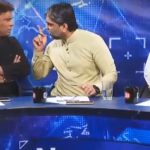 Imtiaz Khan Faran, senior Pakistani journalist and president of the Karachi Press Club (KPC) was physically assaulted by Masroor Ali Sial, senior leader of Pakistan Tehreek-i-Insaaf (PTI) during the recording of a talk show on June 20, 2019.

On June 24, a video of the incident had gone viral on social media in which Sial and Faran were seen entering into an argument during the recording of the programme ‘Newsline with Aftab Mugheri’ on K21 News channel.

On June 25, KPC  called an emergency meeting of the governing body. The members of the body strongly condemned the violent action by PTI leader. During the meeting KPC decided to ban the entry of PTI leaders and announced if the governing party does not revoke the membership of Sial and fails to apologize to Faran during these three days, than KPC in consultation with other journalist bodies will stage protest against PTI.

Taking action on the incident, the Lahore and Islamabad Press Clubs have also temporarily banned the entry of PTI leaders in their premises for three days.

The provincial assembly of Sindh unanimously passed resolution condemning the assault on KPC President, PTI lawmakers supported the resolution and expressed solidarity with journalist community over the issue and extended their complete support in pursuing case against the individual involved in the act.

Prime Minister Imran Khan’s, Special Assistant on Political Affairs Naeemul Haque in his tweet has condemned the “violent reaction” of Sial and said “This kind of behaviour is unacceptable in PTI and is totally unworthy of a PTI Leader.” Haque added that strict disciplinary action will be taken against the leader.

Advisor to Chief Minister Sindh on Information, Law and Anti-Corruption Barrister Murtaza Wahab also condemned the attack and stated, “PPP always respects the rights of the journalists. He said that PTI had the same behaviour in the past as well as and this trend of misbehavior and abusive language has link with the PTI leadership.”