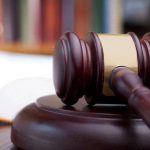 KARACHI: A special anti-terrorism court directed the petitioner and the witness on Saturday to appear before the court in the next hearing of the two cases pertaining to raising anti-state slogans, vandalism, terrorism and attack on media houses.

The investigation officer (IO) submitted the report regarding the petitioner’s absence in the court. The IO said that the petitioner, Abdul Ghaffar, was extremely ill and could not appear before the court.

Counsels for the accused maintained that the case is being delayed because of this. They argued that other witnesses should be summoned if the petitioner could not appear before the court.

The court directed the petitioner and the witnesses to appear before the court under any circumstance in the next hearing. The court adjourned the hearing till July 13.

Ghaffar’s statement had to be recorded before the court on Saturday. The court has declared nine accused, including the Muttahida Qaumi Movement (MQM) founder, absconders in the case. The two cases against the accused were registered at Artillery Maidan Police Station.

Another ATC reserved the verdict on the bail pleas filed by two accused, Abu Bakr and Muhammad Ghazali, in the murder case of MQM-Pakistan leader Ali Raza Abidi. The court issued notice to the government lawyer over the bail plea filed by the third accused, Farooq.

Another accused in the case is already out on bail.  According to police, the accused facilitated Abidi’s murder. Abidi was killed outside his house on December 25, 2018.