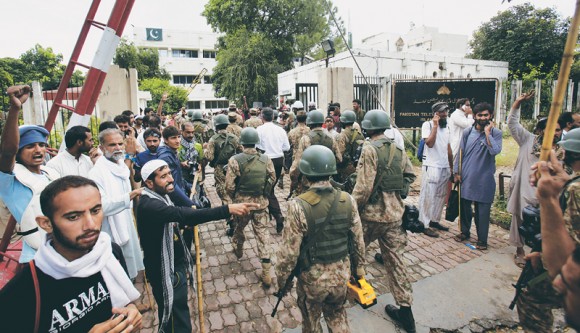 ISLAMABAD: A mob of protesters from the Pakistan Tehreek-i-Insaf (PTI) and Pakistan Awami Tehreek’s (PAT) sit-ins stormed the headquarters of Pakistan Television (PTV) and forced its staff to take two of the state broadcaster’s flagship channels — PTV News and PTV World — off the air, on Monday morning.

According to eyewitnesses, nearly 400 PTI and PAT workers stormed the PTV building, across the road from the main entrance to the Pakistan Secretariat. The attack came soon after demonstrators were repulsed from the secretariat compound.

But the occupying force was dispersed without incident by a contingent of army and Rangers personnel, who arrived on the scene within an hour of the state-TV being taken off-air.

Transmission was restored shortly after noon as the occupying force dispersed peacefully, shouting pro-army slogans and hugging military and paramilitary personnel who arrived at the scene.

This is the first time that PTV’s transmission went blank since October 12, 1999, when former military ruler retired General Pervez Musharraf took power in a bloodless coup after toppling the government of then-Prime Minister Nawaz Sharif.

Eyewitnesses told Dawn the protesters were carrying PTI and PAT flags and shouting slogans in favour of Imran Khan and Tahirul Qadri. PTV Senior Controller Asmatullah Niazi blamed the district administration for what he called their failure to protect the state broadcaster.

PTV employees had been facing a hard time, as their office was located right on the edge of the red zone and was at the centre of the anti-government protests, which have raged on in the capital for over two weeks now.

“Despite the army’s deployment in aid of civil authorities, how could the administration forget to deploy security around this key national institution,” he said.