Home » Featured » Right of freedom of speech not absolute: SC 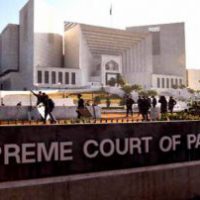 ISLAMABAD-  The Supreme Court has observed that the right of freedom of speech and expression guaranteed under Article 19 of the Constitution is not absolute.

The top court has further observed that the said right cannot be stretched to cover a speech, comment or publication which may tend to influence, impede, embarrass or obstruct the administration of justice, scandalises the Court and brings the judges of this Court into hatred, ridicule or contempt.

The top court has reiterated its consistent view that the real object of initiating contempt proceedings is not to afford protection to the judges from imputation to which they might be exposed personally as individuals or to satisfy the ego of a judge by punishing such person, instead, it is to maintain and strengthen the confidence of the public in general and the litigants in the court and to vindicate the honour and dignity of the Court to ensure that the administration of justice is not diminished or weakened.

Issuing a 14-page judgment, the top court further observed that it is also true that courts in the matter of contempt tend to show grace and magnanimity towards the alleged contemnor in cases where the contemnor without justifying his action/statement shows his repentance.

“However, this is not a rule of thumb and cannot be applied to every case as an apology tendered does not automatically purge the contemnor of the contempt and may not necessarily be accepted unless the court from the surrounding circumstances is satisfied about the bona fide of the contemnor,” it added.

The judgment authored by Justice Sajjad Ali Shah on the Intra-Court Appeal, filed by Pakistan Muslim League Nawaz (PML-N) firebrand Talal Ahmed Chaudhry against his conviction in Contempt of Court, noted that the offending speech was made by him announcement of Panama Case verdict, which disqualified Nawaz Sharif for lifetime.

The judgment observed that some of the members of the then ruling party (PML-N), in order to show their allegiance with Sharif, started a campaign of maligning the Office of the Chief Justice of Pakistan and the Judges of this Court in public gatherings and on electronic media.

“The appellant being one such firebrand speaker has deliberately and intentionally in the stated background, through the stated utterances, attacked the integrity and independence of the judiciary to please and support his leader with the sole intent to ridicule and lower the respect and to shake the confidence of people at large from the safe administration of justice,” it added.

It maintained: “The tenor and content of the speech of the appellant clearly shows that it was designed and worded to scandalize the Court and to bring the judges of this Court into hatred, ridicule or contempt.”

The top court observed that the utterance made by Chaudhry can by no stretch of imagination be termed as bona-fide.

“In the instant case the appellant (Chaudhry) throughout has been trying to justify his offending statement by taking different pleas and even the apology so tendered was in case his justification with regard to the offending statement was not accepted.”

“Unfortunately we see neither genuine remorse nor sincerity on the apology which in the instant case is being used by the Appellant to get out of a difficult situation that he finds himself in for having used intemperate and contemptuous language against the highest Court of the country and the Judges.”

The top court while dismissing the ICA took the view that the contempt committed by Chaudhry is so grave that the apology is not sufficient to purge the contempt.

“The appellant in fact has crossed the boundary of decency and morality by a calculated move with an aim to obstruct and diminish the administration of justice and, therefore, he cannot be allowed to escape the consequences by pleading freedom of speech and expression.”

The top court further observed that Chaudhry tried to explain away and justify his actions and has tendered an apology only as a matter of abundant caution and as a fall back. “Such an apology cannot be accepted.  The appellant has failed miserably in discharging that burden.”  A five-judge bench headed by former Chief Justice Mian Saqib Nisar had heard the ICA of Chaudhry.

The top court in August last year had convicted Chaudhry in a contempt of court case and sentenced him till rising of the court with the imposition of a fine of Rs. 100,000.

Consequently Chaudhry, due to conviction, had also been disqualified under Article 63(1)(g) of the Constitution  to contest any election for next five years for becoming a public office holder.

The Express Tribune: Freedom of speech ‘can’t be stretched to cover contempt’

Dawn: ‘Era of hiding information from people is gone’