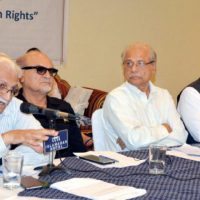 ISLAMABAD: Senator Farhatullah Babar on Tuesday said freedom of expression is the basic requirement to counter the narrative of extremists but in Pakistan it remains badly affected because of a lack of trust on the state as the citizens even hesitate reporting incidents that have happened to them.

Speaking at a seminar, ‘Countering violent extremism through promoting respect for human rights’, he said the Senate Human Rights Committee was shocked to know that in Balochistan 50 mutilated bodies of missing persons had been recovered but not a single relative of the victims came forward to lodge an FIR.

“This showed the isolation of people from the state and the criminal justice system.” Moreover, he added, the misuse of cyber crime laws against bloggers and journalists had also affected freedom of expression and prevented the promotion of an alternative narrative against violent extremism.

The seminar was organised by the National Commission on Human Rights (NCHR) in collaboration with the Sungi Development Foundation at a local hotel. Member NCHR Mohammad Shafique moderated the event.

Senator Babar added: “To fight the militant mindset we need to build an intellectual infrastructure that rests on the foundations of free inquiry and free debate not only in academic institutions but also as a way of life.”

Giving the example of a journalist in Quetta, who was arrested after posting a question about alleged commissions paid to the FC by coalminers, he said crushing space for dissent and restricting freedom of expression by the state encouraged militants to spread their own narrative.

“Every day 269 billion emails are sent and 350 million pictures uploaded on the social media across the world. The militant Islamic state (IS) group contacted Noreen Laghari, a medical student, through the internet. We need an intellectual input to counter it.”

He warned that as the space was shrinking for the IS in Syria, some of its militants may move to Pakistan.

Zafarullah Khan, the head of the Pakistan Institute for Parliamentary Services, blamed non-implementation of decisions taken by parliament for extremism.

He said in 1974 the parliament had enacted a law under which private armed groups or lashkars would not be allowed in the country. But the law was never respected.

“Moreover, parliamentarians also did not play any role to ensure freedom of expression as during the last 70 years not a single cut motion was moved on the defence budget. There is an economy of extremism which should be replaced with the economy of peace and youth counsellor elected during the local government elections should be used for promoting peace,” he said.

Anchorperson Matiullah Jan said media had promoted extremism and demoted human rights on the pretext of collateral damage in Pakistan.

Munir Ahmed, a journalist, said US President Donald Trump rightly said Pakistan had been playing on both sides and should reconsider its policies.

“Unfortunately, the government has failed to provide social comfort to the citizens. On the other hand, extremists have been providing spiritual comfort to people by showing them the dream of paradise,” he said.

Sungi’s Executive Director Shahbaz Malik said it was the collective failure of society that it could not resist the wave of extremism and failed to build an alternative narrative.