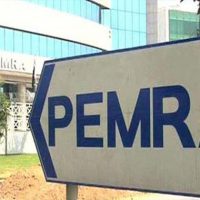 ISLAMABAD: The Pakistan Electronic Media Regulatory Authority (Pemra) on Friday said that it had been noticed that on August 24, 2017, all major news channels misreported the order of the Lahore High Court (LHC) w.r.t. W.P. No. 62459/2017 titled “Amna Malik vs Federation of Pakistan and others.”

It noted that in order to take lead in rating, news channels started misreporting at the time when proceedings were still in process and the written decision of the court was not issued. These news/analyses were contrary to the order of the LHC which were actually received at the Pemra Headquarters on 25.08.2017 at 10:55am through fax.

This irresponsible, unprofessional act of satellite TV channels not only created uncalled for sensationalism with regard to the proceedings of the court but also further damaged the credibility of the TV channels which had been fined/warned in the past over airing a number of false news.

Moreover, coverage of court proceedings in such a highly unprofessional manner clearly indicates that the editorial boards of the media houses have failed. The LHC has also shown its displeasure (Friday proceedings) over misreporting of the proceedings of the court in the media.

The Pemra has time and again advised the broadcast licencees to desist from airing unauthentic news. But unfortunately in recent past it has been noticed that licencees are not exercising proper editorial control on issues and in this regard no positive steps have been adopted. This is sheer violation of the Pemra Ordinance 2002 and Code of Conduct 2015.

In view of the foregoing, all satellite TV channel licencees are hereby once again advised to refrain from airing factually incorrect news/reports, as their unprofessional acts are harming the credibility of state institutions. The operative part of the LHC order is reproduced here: “Notice for 12.09.2017. Meantime, respondents No 7 & 8 shall ensure compliance of the Pemra Ordinance, 2002, the Pakistan Electronic Media Regulatory Authority Rules, 2009 and the Electronic Media Code of Conduct, 2015…..” Moreover, all the news channels are also advised to comply with Pemra Ordinance 2002 as amended by Pemra (Amendment) Act 2007, Pemra Rules 2009 and Electronic Media (Programmes and Advertisements) Code of Conduct 2015, in letter and spirit. This is a serious issue and Pemra would follow it up with Pakistan Broadcasters Association (PBA).