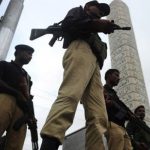 The Bahadurabad police have registered a case against a reporter associated with an Urdu daily on drugs and weapons charges. Asad Ali was allegedly picked up by the law enforcers on Wednesday.

FIR No. 168/19 was registered late on Friday night under sections 6 and 9(c) of the Control of Narcotic Substances Act. According to Section 9(c), contravention of Section 6 (prohibition of possession of narcotic drugs) can result in death or life imprisonment and fine up to Rs1 million if the quantity of the drug exceeds a kilogram.

Bahadurabad SHO Chaudhry Shahid said Ali and his companion, namely Afzal Jafri, were arrested from Sharea Faisal while the police were on routine patrol duty.

The officer said the police intercepted them and found two pistols and narcotics on them, adding that they were arrested in connection with a gang of drug peddlers that was busted some 10 days ago. “We suspect that he [Ali] may have some links with the drug peddlers,” said SHO Shahid, adding that a case has been registered and further investigations are under way.

Ali’s family has claimed that he was arrested on Wednesday by the Bahadurabad police and that the law enforcers kept him in illegal confinement for two days.

“For the past couple of days, we remained in contact with the police but they did not admit his arrest. Now suddenly we heard about his arrest and the FIR,” said a family member.

“He has been arrested because he was trying to expose the nexus between drug peddlers and some black sheep in the police department. He had filed multiple stories over the matter, and then he was illegally detained.”

Meanwhile, the Crime Reporters Association’s office-bearer Kashif Hashmi has demanded forming a proper inquiry team to ascertain the facts behind the arrest, saying that the case investigation should be transferred from District East.