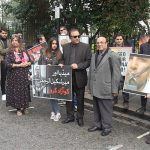 A large number of community members and journalists from three unions gathered outside Pakistan High Commission here on Saturday afternoon to demand release of Mir Shakil-ur-Rahman and to call on the government to stop suppression of media through the use of draconian National Accountability Bureau (NAB) for fake cases and trumped-up charges.

Protests of journalist unions were also held in Bradford, Birmingham, Luton and Manchester which were attended by local British Pakistani journalists and community members. The participation in all demonstration was high despite the fact that fewer people are attending public gathering due to warnings on the outbreak of Coronavirus.

The participants of the gathering termed the detention of Jang/ Geo Editor-in-Chief as an attack on press freedom. The protestors belonged to a wide range of fields including journalists, politicians, lawyers, students and members of the civil society. Representatives of the PPP, PML-N, Jamat-e-Islami, PSP, ANP and Pakistani and Kashmir groups addressed the crowd and promised support for media freedom. Journalists belonging to different organisations were also part of the crowd and showed solidarity with their fellow journalists.

The placards at the protest said: “Geo aur Jeenay do” (Live and Let live), “Free Media in Pakistan, we don’t accept the suppression of media in Pakistan” and “Free Mir Shakil-ur-Rahman.”

The protestors called on Pakistan High Commissioner to the UK to convey their feelings to authorities in Pakistan.

Pakistan Journalists Association (UK) said: “PJA has great concern for this illegal and partial act with a journalist and the owner of a media house. We, as a journalistic body demand from the Pakistani authorities that they must immediately reverse this action.”

The secretary-general for PJA, Wajahat Ali Khan further stated that this act was a direct hit to freedom of the press. He stated that if Pakistani authorities had any concerns about the content aired by Geo, they should have addressed this matter in line with international standards.

International Pakistani Journalists Organisation (IPJO) also issued a statement terming Mir Shakil-ur-Rahman’s arrest as victimisation. The statement signed by general secretary Raza Syed read: “The arrest of Jang group Editor-in-Chief is not only a case of victimisation but it is also an attempt to quash the truth which should be condemned. We will support Jang Group to save press freedom in Pakistan. NAB has been misused to target the largest media group but this act of victimisation will not achieve the desired results.”

Pakistan Press Club UK also condemned the arrest of Jang/Geo Editor-in-Chief. It’s President Shaukat Dar said: “We condemn this cowardly attempt to strangulate the media by the government. Journalists will not remain silent on Mir Shakil-ur-Rahman’s arrest. We have staged a protest outside Pakistan High Commission in London to raise our voice for press freedom and we will continue to do so.”

Shaukat Daar said that the cable operators are being pressurised to either stop airing Geo or to change its number putting it in the end.

Members of these organisations include journalists from all Pakistani media houses regardless of their stance.

Reporters without Borders, Council for Protection of Journalists and various other international journalism bodies have also condemned the detention of Mir Shakil-ur-Rahman and have termed it as equivalent to gagging the media.

Barrister Amjad Malik, Chairman Association of Pakistani Lawyers UK said: “This is current government’s biggest mistake attacking free press and electronic media. We reinforce that it will not weaken the resolve of right thinking people and forces of democracy & freedom of expression shall defeat these tactics. Voices of Pakistan can neither be silenced nor stopped by coercive vindictive measures and due process, fair trial and across the board accountability is not only part of Intl law but now the part of constitution of Pakistan through article 1A.”